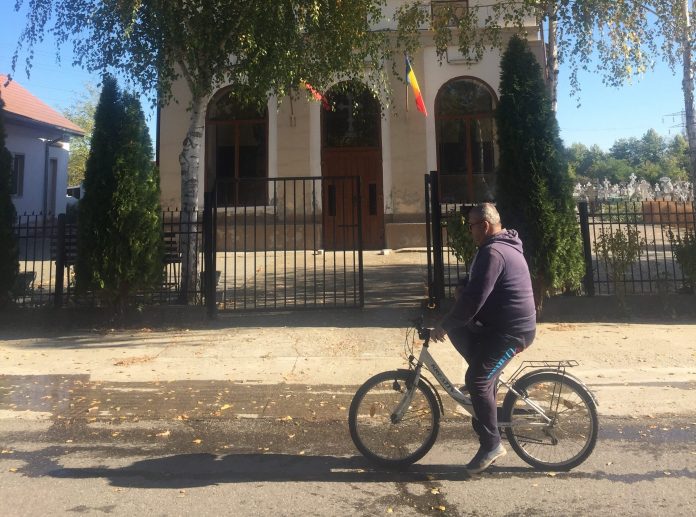 The Yellow Inn in Contesti lies deep in the red county of Dambovita. People drive miles to the tavern which serves some of the best sour soups, or ciorbas, in the area.

With days to go before the presidential election, some voters are not sure if or how they will vote in this village traditionally held by the Social Democrats.

Over a tripe soup, eaten with a crunchy hot pepper and homemade bread, the talk turns to politics and the upcoming presidential election one balmy November evening.

“Of course I will vote, but who deserves my vote? Nobody deserves my vote,“ concludes Ion Dogaru, 64, a retired truck driver who’d traveled 32 kilometers for a bowl of broth. ‘What about ex-Prime Minister Viorica Dancila?’ “She was pushed forward by others, and she doesn’t know how to speak; she needs to read a bit more.”

Contesti is a stronghold of the Social Democratic Party which was recently ousted from government, but local residents including the mayor predict many people simply won’t turn out to vote in Sunday’s election or the expected runoff two weeks later.

“Not many will vote,” said Alexandru Marian, who’s been mayor for 12 years. “The electorate has changed a lot in the last ten years; they are much younger and now everyone votes how they want” and not what they are told to do.

Strategically located close to Bucharest, Targoviste and Ploiesti, the agricultural commune has a goat farm and mushroom farm and potential for economic growth. A connection to a gas pipeline, a proper sewerage system and greater political stability would draw more investors and create jobs, the mayor says.

Driving along the lanes of Contesti on a glorious autumn day, the odd car disturbs pheasants in the fields and deer down the country roads. A visitor to the community of 5,500 would be forgiven for thinking Romania wasn’t holding elections this weekend. There are no posters of the 14 candidates running in the presidential elections around the village.

Most people seem unenthusiastic or reluctant to talk about their political choices. The only thing they are keeping an eye on is whether the Liberal government which took office this week cuts pensions and salaries.

Dan Marin, is an 83-year-old retired carpenter with a long memory and a monthly pension of just 820 lei. He remembers when the Communists came to power in 1947 and many Liberals left the country. “It was always the party of rich people,” he says. “I never liked them, and I never will.”

His two daughters have settled in France, and he was operated there for colon cancer. ”It is an advanced country and they have good social welfare,” he says.  “Dancila doesn’t have a chance because the Social Democrats are divided but I am with the party and will vote for them.”

Lucian Duta, a father of two, has just got back to Romania after working for three months in Leicester, central England, as a construction worker. He says he was ripped off, paid less than promised, but he remains upbeat. “You can’t let yourself dwell on things that went wrong.”

His wife resigned from a local Italian shoe company this morning and is going to Ireland this weekend to begin a job in a hotel in Dublin where Duta’s sister works.

“I will vote for Iohannis,” he says. “If I vote for the Social Democrats, my arms and legs are tied,” he adds, getting on his bicycle, the preferred form of transport in the village.

“(The Social Democrats) raised salaries and pensions, but they got the money from loans, not from money produced in the country.”

“There are jobs here, but they are not well paid,” but he will stay for the time being to look after his children. “I will sacrifice the pig and make sausages, sarmale and black pudding for Christmas.”