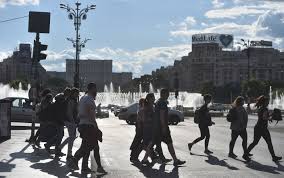 Romania posted a record 213 deaths of Covid-19 patients in a single day on Tuesday, while cases soared in the capital Bucharest which added 1,946 new infections in the past 24 hours.

Overall, cases were lower than the previous week with 7,439 cases reported in the past 24 hours following more than 29,000 tests. That gave a positivity rate of 25.3%, which is similar to previous days.

Bucharest added by far the most cases; followed by the Cluj region in northwest Romania which reported 464 cases’; Iași in northeast Romania which had 353 new infections, and the Black Sea Constanta region which posted 281 cases.

More than 12,500 hospital beds are occupied by SARS-CoV-2 patients, of which 1,276 are in intensive care units, the Strategic Communication Group said.

The death count now stands at 12,660 after the record number of deaths in a single day.

Twelve of the 213 Covid-19 patients didn’t have underlying health conditions such as diabetes or cancer. Four of the 119 men and 94 women who died were in their 30s, six patients were in their 40s, 21 in their 50s and the rest over 60.

Since the start of the pandemic, Romania has reported almost 525,000 cases of which 417,000 patients have recovered.

There are about 53,000 people who have tested positive for the virus who are isolating at home or in institutionalized care.