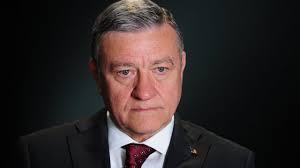 A court on Thursday acquitted Mircea Sandu, the former chairman of the Romanian Football Federation of taking a bribe worth about 149,000 euros.

Mr. Sandu, 67, the longest-standing chairman of the federation and one of the best-known faces of Romanian football of recent times was sent to trial at the Bucharest Court in June 2019 on charges of taking a bribe of 724,000 lei from a lawyer and another person, Agerpres national news agency reported.

His wife, Elisabeta Sandu, who was charged as being an accessory to bribery was also acquitted. The court ruled that the bribe “didn’t exist.” The ruling isn’t final.

In the bribery case where he was acquitted Thursday, prosecutors charged that “on Oct. 2, 2009, Mircea Sandu, in his capacity as the chairman of the football federation, aided by his wife Elisabeta Sandu, received a bribe of 724,000 lei from two individuals, one of whom represented a law firm.”

They said the money was received “in exchange for the Romanian Football Federation signing two contracts for legal assistance. Two contracts were signed on October 20, 2009.”

The National Anti-Corruption Directorate said that in 2011, the unnamed law firm received 11.7 million lei as a result of the two contracts.

Mircea Sandu was chairman of the football federation from 1990 to 2014 and earned the moniker “the godfather.” He was considered the most influential person in Romanian football in the post-revolution years.

This week, prosecutors said that three former Romanian Football Federation officials had been sent to trial on suspicion of siphoning off 740,000 euros from the federation from a building project.

New rules prevent suspects being named, but several media outlets reported that Mircea Sandu was one of the three officials being prosecuted.