A Romanian court has handed sentences of nearly 12 years to three owners of the Colectiv nightclub, where a fire erupted four years ago, killing 64.

The Bucharest Court also sentenced Ioana Daniela Nita, the manager of a company whose fireworks sparked the fatal blaze on Oct. 30, 2015 to 12 years and eight months, the highest sentence handed out Monday.

Prosecutors sought a bigger sentence for her alleging she tried to destroy evidence.

The three owners received sentences of 11 years and eight months on charges of  manslaughter “in an aggravated form,” a reference to the high number of deaths and the way they were caused.

A pyrotechnician received a sentence of 10 years, and six others also received prison sentences.

The sentences can be appealed.

The fire broke out during a concert by rock band Goodbye to Gravity after a spark from pyrotechnics show ignited flammable acoustic foam.

Hundreds of revellers were in the club, and 27 died immediately from burns or smoke inhalation. Some died or were injured because they couldn’t escape through an exit door that was was locked with a chain.

Others died in the following weeks from their burns or respiratory problems caused by the smoke.

The tragedy led to massive street protests over the fire and corruption which people said had led to lax safety standards. The protests caused Premier Victor Ponta and his government to resign on Nov. 4.

Public anger has persisted because nobody has yet been punished in the case. People  commemorate the tragedy and its victims every year on the anniversary of the fire. 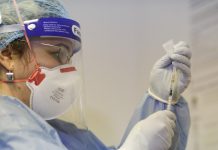