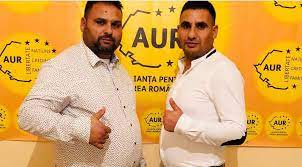 Dozens of Romanian intellectuals and civic rights activists have asked the government to stop cooperating with a far-right party that entered Parliament in December saying the group posed a threat to democracy.

In a letter to the leaders of the ruling coalition, signatories said they were alarmed by recent meetings of the education, health and justice ministers with the Alliance for the Unity of Romanians, a nationalist group commonly known by its acronym AUR which means ‘gold’ in Romanian.

The party which was only created 14 months ago shocked many after it won 47 seats in the two-chamber 466-seat Parliament defeating older parties that were headed by a former president and a former prime minister.

The new group gained support in 2020 with well-organized anti-mask protests, and declares itself hostile to the European Union, globalism and same-sex marriage, which is already outlawed in Romania.

The party is opposed to Covid-19 restrictions, its members broadcast conspiracy theories, and leaders are critical of the European Union which Romania joined in 2007.

“They can’t be a partner for dialogue in a democracy,” the signatories wrote.

The letter came after the three ministers held talks with leaders of the new party. “This  willingness (to engage) is scandalous and inadmissible.”

.They said that relations with the party should be kept to a bare minimum and a ‘cordon sanitaire’ should be put in place to keeps „‘a formation that is dangerous to our democracy” at bay.

The signatories pointed out that coalition leaders had pledged to “defend freedom, respect, integrity and individual responsibility” when they threatened to derail Romania from its “European path”

“It’s clear that there is an irreconcilable conflict” with AUR party leaders.

“Boycotting the leaders of these parties is a rule that no honest politician can object to,” they wrote.

They added that extremist parties had been elected across Europe, “but these parties aren’t treated with undue goodwill.”

“Before it’s too late, we think it’s the moment for party leaders to end their dialogue with AUR.”

The letter was addressed to Liberal Party leader, Ludovic Orban, chairman of the Save Romania Union, dan Barna, the PLUS party leader Dacian Ciolos, and the chairman of the ethnicHungarian party, Hunor Kelemen.