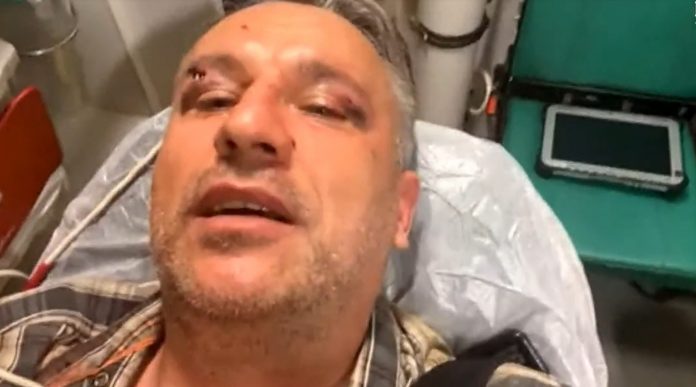 Two Romanian journalists and an environmental activist who were filming a documentary about illegal logging in northern Romania have been beaten and one was stripped, Greenpeace said.

Two lost consciousness on their way to Vatra Dorna town hospital after the attack on Thursday, Newsbucovina.ro reported.

The three were set on by a group of 20 people in a forest in the northern county of Suceava while filming they said.

The environmental non-governmental organization said it would provide legal help for the journalists. It called on the interior ministry to investigate the case. It posted pictures of three after they were beatings in a press release.

The environment activist  Tiberiu Bosutar told police that one of the aggressors threatened to drag him along with his car until he was dismembered.

„It’s not an isolated case.,” he said. “It’s a system which is trying to stamp us out.”

„They stripped me and told me to go home like that,” he said. He said he recognized some of the individuals who took part in the attack.

Director and journalist Mihai Dragolea was also attacked.  The victims managed to identify some of the aggressors who have been taken for questioning.

„Greenpeace lawyers have connected with the victims and are offering urgent legal assistance. We are asking the General Police Inspectorate to get directly involved to resolve this case and to follow the inquiry until the end.”

Illegal logging is a major problem for Romania, where six forest rangers have been killed in recent years by timber thieves, two of them in 2019. That  prompted thousands to protest in Bucharest and demand government action.

Another 650 forest workers were beaten, attacked with axes or knives, or even shot at after catching illegal loggers in the act.

Romania passes law to crack down on widespread illegal logging