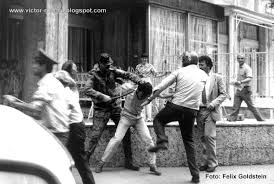 A Romanian lawmaker on Monday asked the justice minister to speed up justice for the victims of a bloody miners rampage more than 30 years ago.

Liberal lawmaker Alexandru Muraru on Monday asked Stelian Ion, the justice minister, to make sure military prosecutors resume the case in which a former president, an ex-prime minister and others are charged with crimes against humanity.

Mr Muraru, who heads a regional office of the Liberal Party said the government would provide the necessary logistic and human resources for the case.

At least four people died and hundreds were injured during three days of violence in the Romanian capital in June 1990.

Coal miners from western Romanian boarded trains and arrived in the capital at dawn on June 13 to “restore order”. They smashed a weeks-long anti-government protest in Bucharest’s University Square.

The case has stalled and restarted many times over the past 30 years. Commentators say the involvement of former senior figures has made prosecutors reluctant to pursue charges.

Former President Ion Iliescu, former Prime Minister Petr Roman, the then head of the intelligence services and others are charged with crimes against humanity.  They risk sentences up to 25 years in prison.

After wanton acts of vigilante violence , the recentky-elected Mr. Iliescu thanked the miners for their efforts. He congratulated them for “showing you are a powerful force with civic responsibility”.

Security forces joined the miners on the violent spree. Workers also joined in an acted as paramilitaries to smash anti-government dissent. Police did little to stop the violence.

Thousands emigrated to the West, fearing the country would revert to a repressive one-party state again.

More than 1,000 detained in across Russia after Putin declared ‘partial’ mobilization for Ukraine...