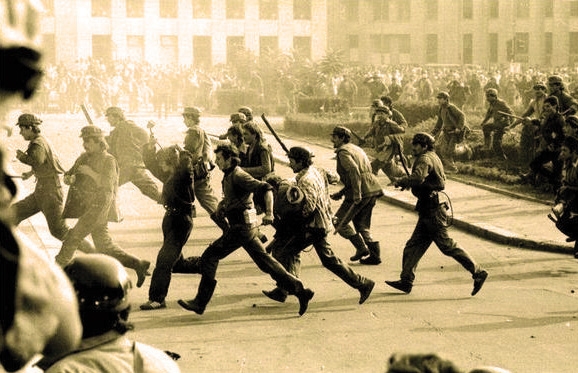 Thirty years ago, club-wielding coal miners smashed a pro-democracy protest in the heart of the Romanian capital and went on a savage rampage that lasted three days and left at least six dead and 500 injured.

After wanton acts of vigilante violence from June 13-15, recently elected President Ion Iliescu publicly thanked the miners for their efforts and for “showing you are a powerful force with civic responsibility.”

Romania effectively became a pariah state among the Central and East European states that had recently thrown off decades of communist role.

Outside observers expressed doubts that the country had thrown off the shackles of communism and was pursuing democratic reforms. Thousands of discouraged and frightened young people emigrated or sought asylum abroad.

Romania’s uprising against the regime of dictator Nicolae Ceausescu in December 1989 was violent, the only overthrow of communism in the old Eastern bloc where there was bloodshed. More than 1,100 people were killed and thousands were injured.

Romania’s former communists, styling themselves as the National Salvation Front, easily won election in May 1990, but young people demonstrated against the revolution which they said had been hijacked by second-tier communists and the subsequent elections, which they claimed had neither been free nor fair.

On the dawn of June 13, coal miners from the Jiu Valley arrived in the capital and proceeded to University Square, the scene of a 53-day protest. They up anti-government demonstrators with clubs and pipes in a pre-dawn raid, before vandalizing the offices of anti-government newspapers and opposition headquarters.

They proceeded to ransack the home of presidential candidate Ion Ratiu, an emigre businessman who wanted communists disqualified from holding high office.

Security forces joined the miners on the repressive spree, with the workers acting as paramilitaries to smash anti-government dissident. Police did little to hinder the arbitrary attacks.

Thousands emigrated to the West, fearing the country would revert to a repressive one-party state again.

Thirty years later, there has been no thorough investigation, less so prosecution of the bloody events which every year slip lower and lower in the public conscience.

Observers say that  prosecutors are waiting for Iliescu, now 90, to die so he won’t have to account for his role in the violence.

“This brutal repression was even more serious as elections had taken place, a government was installed, and the demonstration was far from creating a risk” for the new government.

“From my point of view, what happened shows the deep-rooted hatred the communists who stole the revolution had toward people who were enlightened by education and faith.”

He said it would not be long until the prosecutors who had failed to investigate the violence would “disappear” from the prosecutor’s office.

“Then we will have a trial in which the guilty will be punished,” he said.

“This will be an act of justice toward Romanians and all of us who were victims of illegal, unconstitutional violence of a most severe gravity.”