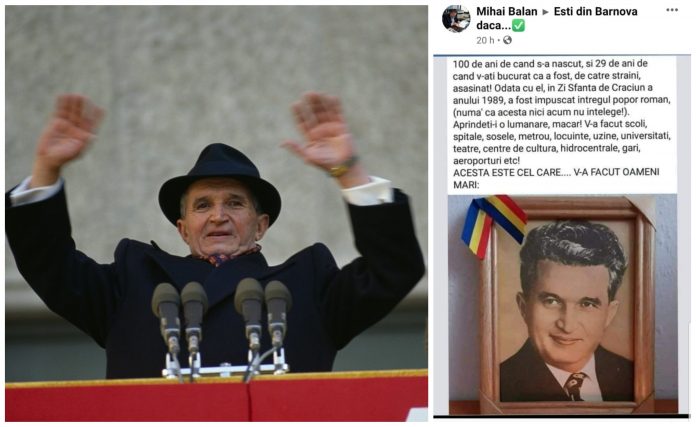 A Romanian mayor who extolled the virtues of late Communist dictator Nicolae Ceausescu on social media has been criticized by a government institute dedicated to investigating crimes committed during the communist era.

Mihai Balan, mayor of the northeastern village of Barnova, and a member of the opposition Social Democratic Party posted an image of Ceausescu on Friday on Facebook with a text saying he’d “built schools, hospitals, roads, universities, theaters and the subway and had been “killed by foreigners” in December 1989.

„He made you great,” he told Romanians.

The Institute for Investigating the Crimes of Communism and the Memory of the Romanian Exile on Friday expressed “strong disapproval” of the mayor’s public praise of Ceausescu who ruled Romania with an iron fist until 1989 when he was deposed and executed.

“Tens of thousands of victims (suffered) at the hands of Romania’s communist regime, while the crimes and abuses committed before 1989 can’t be denied,” the statement said.

In the 1980s, Romanians endured food and heating shortages, rationing, power cuts as well as the all-pervasive hand of the Securitate secret police, as Ceausescu stifled dissent and tried to pay off the foreign debt, exporting food and other goods to raise the money.

Thirty years after his ouster, some people have forgotten the hardships and are nostalgic for an era of fixed prices and stable jobs.

But the institute said it was „impermissible that more than 30 years after the collapse of Romania’s communist regime, the representatives of political groups are trying to distort history, to fuel historical falsehoods and to stain the memory of those who lost their lives and suffered after World War II.”

It said  that such “reactions … are an offense to the memory of those who fought, sometimes costing them their lives, to defend democracy and the rule of law.”

“Moreover, such attitudes are a major obstacle in the progress made by the Romanian state in the last decades so that this dark chapter of Romanian history won’t be repeated.”

It called Marcel Ciolacu, the acting chief of the Social Democratic Party, Romania’s largest party, to “take urgent and firm measures to sanction” the mayor.