A Romanian citizen in the UK is suspected of assisting the Killnet hacker group in its cyber attack against Romanian websites, the government said.

The man who is now in the custody of British authorities, translated the materials of the hacker group from Russian to Romanian and identified  potential targets, Romanian Interior minister Lucian Bode said Tuesday.

He was identified as Ioan Fehrer, 23, by Killnet who demanded his immediate release.

“I appeal to the Romanian Government! This person has nothing to do with Killnet! He was a member of the Telegram group. How can you tell your people that a guy helped us with the attacks? ….  Leave him alone. If he supports Russia, that doesn’t mean he’s a criminal. If he is not released within 48 hours, I will destroy Romania, Great Britain and Moldova“, the Russian cybergroup said.

Pro-Russian hacker group Killnet claimed responsibility for the attacks against government sites in Romania, including the official government web page and the defense ministry. Political parties and cultural organizations were also hit.

The national cyber security authority, whose website was also briefly taken down, the number of IP addresses used for cyber attacks against Romanian public and private institutions increased five times over the weekend. 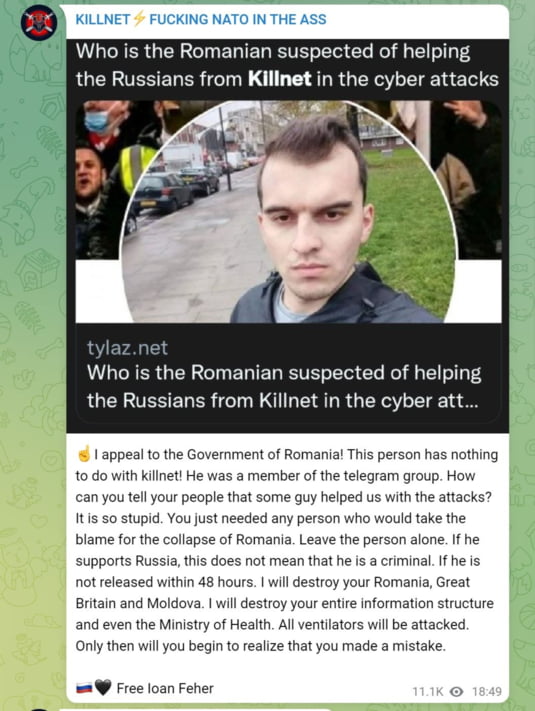