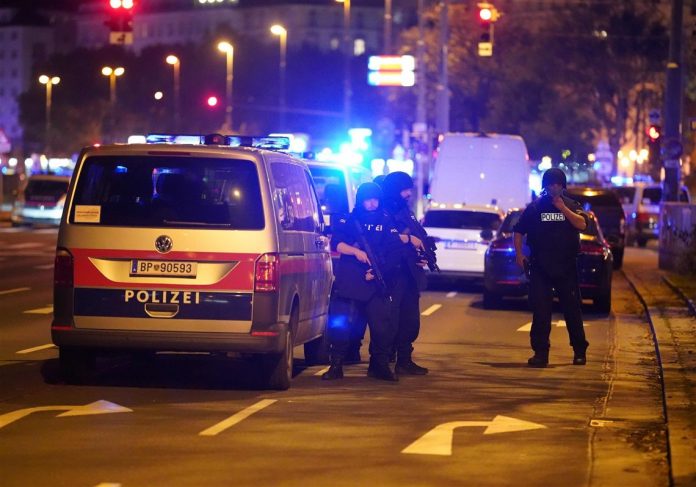 An Austrian gunman who killed four people and wounded 17 in the Austrian capital on Monday evening was a known Islamist born in Vienna ‘who wanted to join ISIS in Syria,’ officials said.

At least one terrorist started shooting close to a synagogue in the city center at 8pm. Armed with an automatic rifle, pistol and machete, he was ‘neutralized’ at 8.09pm after marauding through the streets wearing a fake explosives belt.

Austrian Interior Minister Karl Nehammer said the gunman was a 20-year-old Austrian-North Macedonian dual national who had a previous conviction for membership of a terror organization.

The Romanian president tweeted: “Terrible news from #Vienna tonight. I strongly condemn these heinous acts of terror. My condolences to the families and close ones of the victims. Romania stands in solidarity with #Austria.”

The gunman was known to intelligence as one of 90 Austrian Islamic radicals who wanted to travel to Syria, local media reported, but police did not believe he was capable of carrying out an attack in Vienna.

The killer had pledged allegiance to the leader of ISIS and completed a 22-month prison sentence in December last year, local reports said.

A huge manhunt is still ongoing with 1,000 security personnel drafted in to search for other suspects after shots were heard in at least six locations a few hundred yards apart in the city center.

Two women and two men were killed on Monday night. One of the women was a waitress who died of gunshot wounds in hospital, and another who was aged in her 40s later died in the Ottakring Clinic, local reports said.

One of the male victims was discovered in the meat market, while another was found gravely wounded on Franz-Josefs-Kai, close to the Danube. .