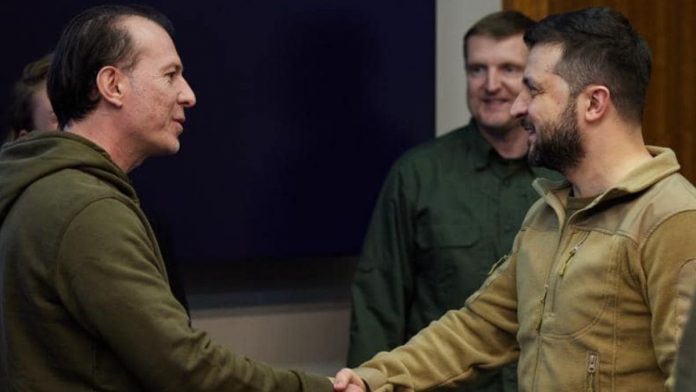 Romanian Senate speaker Florin Cîţu visited Ukraine on Wednesday traveling to  Hostomel and Irpin, places where there is evidence of war crimes committed  by Russian forces against Ukrainian civilians.

His visit to Ukraine comes a day after Romanian Prime Minister Nicolae Ciuca made an unannounced trip  to Kyiv where he had talks with Ukrainian President Volodymyr Zelensky.

“It is an honor  to be in Ukraine today,” with Irène Kälin, Swiss National Council President and North Macedonia Assembly President, Talat Xhaferi, he said.

The 50-year-old dressed in khaki channeling the Ukrainian president who has appeared in public and addressed parliaments around the world in a now trademark khaki T-shirt, jacket and pants.

The three discussed “the atrocities committed by  the Russian  armed forces in Ukraine and the  plan of reconstruction of the country  after the war,”  he wrote on Facebook. „Our friends  are ready to help us  bilaterally and internationally, to increase the pressure of sanctions on Russia, to join  the reconstruction of independent, sovereign Ukraine , prosperous,” said Ruslan Stefanchuk, the  president of the Rada, the Ukrainian legislature.

Romanian PM has surprise meeting with Ukraine’s Zelensky in Kyiv