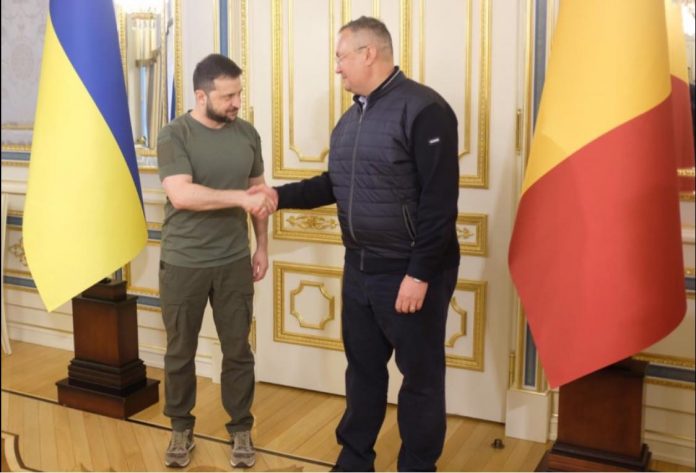 The prime minister had not announced the trip which only became public when he posted a photo and commentary on social media on Tuesday evening.

The purpose of the visit was to cement Romania’s support for its neighbor after Russia invaded and to make sure the rights of the large Romanian-speaking minority there  are respected.

“I assured him of Romania’s full support in efforts to stop Russia’s illegal and immoral aggression, human atrocities and the material destruction the country has suffered,” the prime minister said in a post on Facebook.

Romania has made a voluntary contribution to a fund to finance the prosecution of individuals who committed war crimes in Ukraine at the International Criminal Court, he said.

Ukrainain Foreign Minister Dmytro Kuleba visited Romania last week to discuss the war with the prime minister and foreign minister and ask for military aid. Both sides asked for discretion over what hardware was actually offered, but Kuleba said he was happy with Romania’s support.

Aside from the war effort, the prime minister also spoke to Mr Zelensky about the Romanian-speaking community, a mixture of ethnic Romanians and Moldovans, numbering approximately half a million.

„They are veritable bridges between our societies,” the prime minister said, calling for their linguistic rights to be respected “which will only  make Ukrainian society stronger.

Russian propaganda has tried to turn Romanians against Ukraine saying the rights of the Romanian minority there aren’t respected and Romania’s leaders are not interested in them.

Romanian diplomats have worked discreetly behind the scenes for years, with limited success, to try and ensure Romanian-language education for the minority.

Before Russia launched its invasion, the Romanian minority in Ukraine was not a public topic of debate.

Romania is a strong supporter of Ukraine’s bid to join the European Union and Mr Ciuca congratulated Mr Zelensky for making a formal membership application.