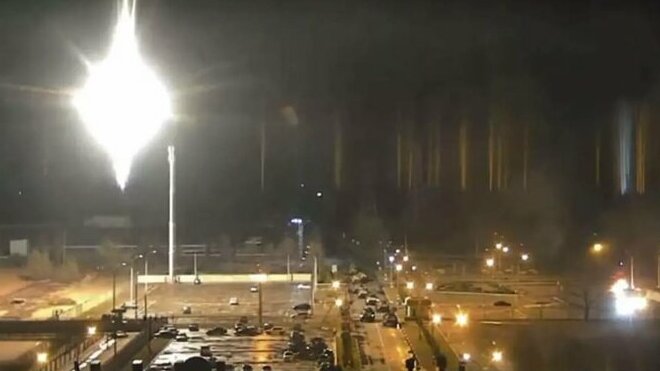 Russian troops attacked the Zaporizhzhia plant located in southeast Ukraine in the early hours of Friday. CCTV captured a fierce gun battle between Putin’s men and Ukrainian defenders that sparked a fire in a six-storey training building just outside the main complex.

Moscow’s men then stopped firefighters getting to the building for several hours.

NATO’s top official Jens Stoltenburg, who is meeting NATO allies in Brussels, denounced attacks on all civilian infrastructure and said the fire at the plant underlined the need to end Putin’s war as soon as possible.

The head of the United Nations’ atomic watchdog said there was no release of radiation at the Zaporizhzhia nuclear plant after a building on the site was hit.

The assault renewed fears of another emergency like the 1986 Chernobyl accident, the world’s worst nuclear disaster, which happened about 65 miles north of the Ukrainian capital.

The attack led to phone calls between Ukrainian President Volodymyr Zelenskyy and U.S. President Joe Biden and other world leaders. The U.S. Department of Energy activated its nuclear incident response team as a precaution.

He said that the operator and the regulator said the situation „continues to be extremely tense and challenging,” and that only one reactor was operating at about 60%.