Nicusor Dan, a former civic activist and mathematician won a surprise victory in the Romanian capital on Sunday to become mayor of Bucharest, an exit poll showed.

It was the third time that Mr Dan, 50, had run for the post and the score was a boost for the ruling minority Liberal Party.

Supported by a center-right alliance, Mr. Dan won 47.2% f the vote according to the CURS-Avangarde opinion poll to defeat the incumbent Gabriela Firea who polled 39%. She was running for the opposition Social Democratic Party, the biggest party in Romania’s parliament.

Ms Firea was the favorite to win, especially with the entry of Traian Basescu, a former centrist to the race. He took away votes from Mr. Dan and won more than 8% of the votes the exit poll showed.

Turnout was below the national average in the Romanian capital of 2.3 million making the exit polls even more surprising. Just under 35 % cast their ballots. A low turnout favored the incumbent.

Casting his vote Sunday morning, Mr. Dan said: “I’ve been waiting for a long time for this vote. I was panting to vote, to get rid of the tentacles of personal interests which have kept this city in an undeveloped state, so that we don’t even have hot water, let alone the traffic or pollution,” Mr. Dan said

Mr. Dan made his name on a campaign to save old buildings from disrepair and dereliction. Architecturally, Bucharest is an eclectic city with a host of crumbling old buildings, many of which would be historical monuments in other countries.

Prime Minister Ludovic Orban, who is also Liberal Party chairman called it “a historic day. For the first time since the 1989 revolution, the Liberal Party has a clear victory in the elections and beat the Social Democratic Party hands down.”

Ms Firea cast her ballot as polls opened and said she voted „thinking about all children, young people and adults in Bucharest… People should come first.”

In a combative tone, she later said: „The horses don’t die when the dogs want them to,” a Romanian expression meaning she was not about to lose regardless of what her rivals want.

The elections were originally planned for June but were delayed due to the health crisis. Some 18.2 million voters will elect mayors and other officials for 40,000 local positions.

Schools were shut across the country around the vote. Many double as polling stations and they were closed to allow authorities time to prepare them with restrictions which are in place during the pandemic.

Beyond the immediate outcome of Sunday’s vote, the elections will give all parties an idea of where they stand ahead of Dec. 6 general elections.

The Social Democrats have a majority in parliament with their allies and recently approved a 40% pension hike, even as the economy is forecast to shrink by 4.7% in 2020.

The increase, which is popular with the Social Democrats’ voters, would leave a budget gap of 8.3%. 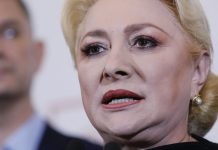 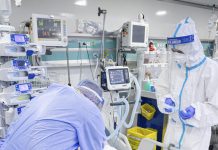