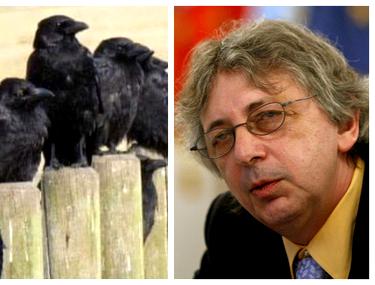 Vladimir Tismaneanu, a well-known political scientist and professor at the University of Maryland, in the U.S. is facing accusations of racism in Romania over a post he shared on social media.

Romanian-born Tismaneanu posted an image on Friday where Roma or Gypsies from a town in southern Romania were depicted as “crows” a derogatory and widely used term in Romanian for Roma and blacks.

He later deleted the post which he initially said was “very cool,” saying he thought it was a joke, and he hadn’t understood the racist connotations. “I don’t live in Romania, and I don’t know many things,” he wrote.

After widespread criticism, including from the University of Bucharest and the Elie Wiesel National Institute for the Study of the Holocaust in Romania, Tismaneanu issued a full apology.

„Having spent hours reflecting, I would like to offer a final apology for the racist, inappropriate and most importantly, hurtful meme I posted yesterday,”he wrote. „While I truly did not think deeply about the racist implications in the moment, I should have.

„There is no excuse. I will do better in the future, I will learn from this,: he said adding he was „open to working with those active in the Roma community about how to combat hate, intolerance, and bigotry. „

Earlier, the National Anti-Discrimination Council said the body would ask the University of Maryland to „issue an opinion about the message…. based on its principles of ethics, and non-discrimination,” the council’s chairman, Csaba Asztalos, wrote on Facebook.

The post, initially published by publisher Denisa Comanescu of Romania’s biggest publishing house, Humanitas, drew criticism from the Elie Wiesel National Institute for the Study of the Holocaust in Romania.

It said: “Racism among the cultural elite! Romanian citizens are waiting for at least an APOLOGY apology from Denisa Comanescu and Vladimir Tismaneanu (University of Maryland),” in a posting on Facebook.

The University of Bucharest, where Tismaneanu is coordinator for the “Hannah Arendt” Center for Totalitarian Research said it “distanced itself from the public position expressed by professor Vladimir Tismaneanu.”

“Defending human dignity, the fight against xenophobia and racism, the defense of individual liberties are some of the non-negotiable values which are part of the activity of the academic community of our university.”

Tismaneanu is director of the University of Maryland’s Center for the Study of Post-Communist Societies.

Tismeanu has written numerous articles and books on Stalinism, the communist period in Romania, nationalism and the Soviet Union. He has drawn controversy over praise of  former President Ion Iliescu and close links to Traian Basecsu, president from 2004 to 2014.

Critics said that as an intellectual, he should have maintained more distance from them.