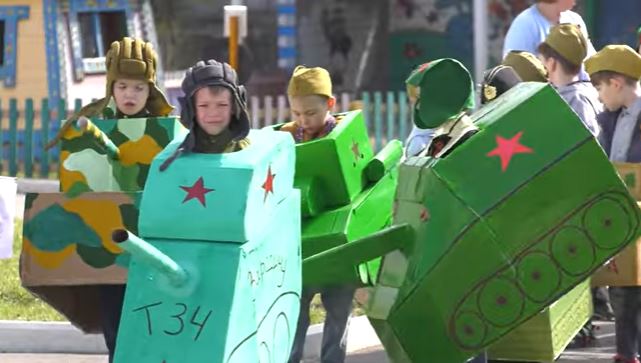 As Russian President Vladimir Putin on Monday blamed the West for Ukraine war in his ‘Victory Day’ speech, children in Russia were playing a part in the Kremlin’s war propaganda.

‘Youngsters across Russia paraded in fancy dress to celebrate the day, pretending to be tanks and war planes, independent media reported.

The tanks cardboard tanks sported the red star or the Russian „Z” symbol which has been spotted on Russian tanks and other military vehicles in Ukraine.

It is seen as a show of support for Russia’s invasion of Ukraine.

The images give an idea of the atmosphere in Russia which has seen a media crackdown since Russia launched its invasion on Feb. 24.

The images show that  children are being used as part of the Kremlin propaganda machine to attract support for the war.

Putin claimed Russia’s invasion of Ukraine had been necessary because the West was “preparing for the invasion of our land, including Crimea.”

Before the invasion, Russia had amassed more than 180,000 troops along its border with Ukraine — insisting all the while that it had no intention of invading.

There was little evidence of military aggression from Ukraine toward Russia. Moscow’s claims to the contrary were seen by many as a pretext for justifying its attack.

The Russian government designated the Latvia-based independent Meduza news outlet a foreign agent on April. The move means it will have to label itself as such and will subject it to increased government scrutiny.