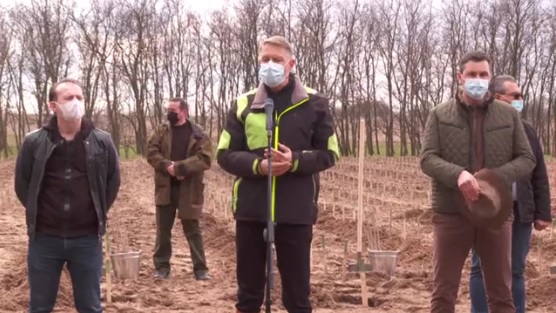 Romania’s president says the government will spend 1.5 billion euros to plant new trees and combat deforestation which has led to swaths of arid land in parts of the country, exacerbating global warming.

Romania loses more than 1,000 hectares of arable land a year due to deforestation, President Klaus Iohannis said on Wednesday.

Some parts of southern Romania have been turned into a semi-desert in recent years.

During a visit to the melon-growing region of Dabuleni, in southern Romania, known as „the Romanian Sahara,” and „the Oltenian Sahara” the president said immediate action was needed.

“We need to intervene here,” to stop the desertification, he said paying a visit to an area that where new trees are being planted.

Deforestation began in Olt region in the 1960s when Nicolae Ceausescu was in power and sped up after the 1989 revolution. Land was returned to pre-communist landowners and their descendants who cut down an estimated 30,000 hectares of forest.

The 1.5 billion euros will pay for millions of new trees on top of the millions Romania is already planting.

The money will come from the EU’s Recovery Plan, which is structured around six pillars: green transition; digital transformation; economic cohesion, productivity and competitiveness; social and territorial cohesion; health, economic, social and institutional resilience; policies for the next generation.

The plan is to help the EU achieve its target of climate neutrality by 2050.

Mr. Iohannis said there needed to be widescale reforestation for it to be effective.

Here in Dolj “desertification is a reality,” he said. “The arable land has transformed in what what we see, sandy soil, and if we do nothing it will spread further.”

“We need a clean environment for future generations.”

He said the solution was to extend forest areas.

“I’ve spoken to the government and we will allocate the huge sum of 1.5 billion euros.”

The reforestation together with tackling illegal logging “will lead to substantial progress and the recovery of valuable land in Romania.”