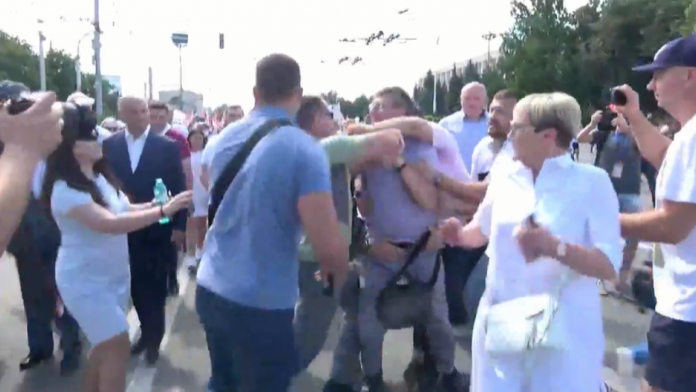 Scuffles broke out in the former Soviet republic of Moldova on Sunday between nationalist and pro-Russian factions.

The former mayor of Chisinau, Dorin Chirtoaca, attempted to force his way past  security guards and lunge at former Moldova presidents Igor Dodon and Vladimir Voronin during an election rally.

The former mayor is running for AUR, a far-right Romanian party in the July 11 parliamentary elections.

The two ex-presidents favor closer relations with Moscow. Moldova was a Soviet republic until 1991. It was formerly part of Romania.

Video captured Mr Chirtoaca hitting at least one person in an apparent attempt to get to the two former presidents. He was thwarted by security guards and police officers who grabbed him and pushed him away.

The former mayor, however, claimed that the AUR group had been provoked by the pro-Russian camp.

„They attacked us and we responded “ , he told   stiri.md.

“Dodon and Voronin gave the order for us to be attacked, to use tear gas and to stamp on the flag”, he said.

“I approached the two Mafia bosses to demand a response, man to man”, he was reported as saying.

Thousands of people took part in a march called “We love Moldova!” on Sunday which was organized by the Communists and Socialists Bloc. Supporters shouted slogans in Russian.

The march started at the Academy of Science, past the Stephen the Great Boulevard and on to the Parliament and president’s offices, Unimedia.md reported.

Ms Sandu who took office in December 2020 has promised democratic and market reforms.