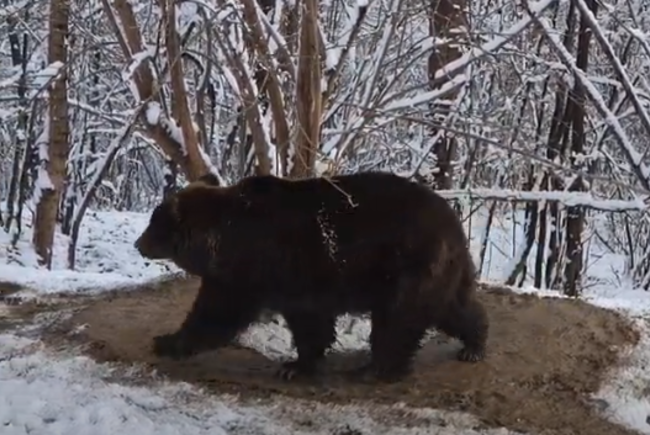 Ina, a female brown bear found freedom and a new home after 20 years in captivity in a zoo in northern Romania.

It should have been a story with a happy ending, but the trauma she endured at the zoo has left a permanent mark even more than six years after her release.

In 2014, she was taken from the zoo in Piatra Neamt, and adopted by the Libearty bear sanctuary in Zarnesti in the Carpathian Mountains where she has ample space to wander, climb and roam, a far cry from the cage and a small space she called home before.

Instead, Ina he continues to walk round and round in a small circles, unable to shake off her trauma.

A recent film shows how her walking around in small circles so compulsively that she has worn away the snow to reveal soggy muddy ground.

“Her mind has remained captive in an imaginary cage in which she was kept prisoner for 20 years. his is the very image of trauma, which sometimes can’t be cured and is never forgotten,” said the Association of Millions of Friends who rescued her.

”Bears aren’t beasts with no soul. They suffer just like we do!’’

The group managed to secure her released with the help of the National Environment Guard. The Libearty bear sanctuary is the biggest sanctuary for brown bears in the world.

In Piatra Neamt zoo, her life was cramped. She  had a pen and a den she shared with her sister, Anca, with one week in the space and one week out in a cage.

But the situation proved untenable and Ina was released and sent to the bear sanctuary, Timișoara Online reported.