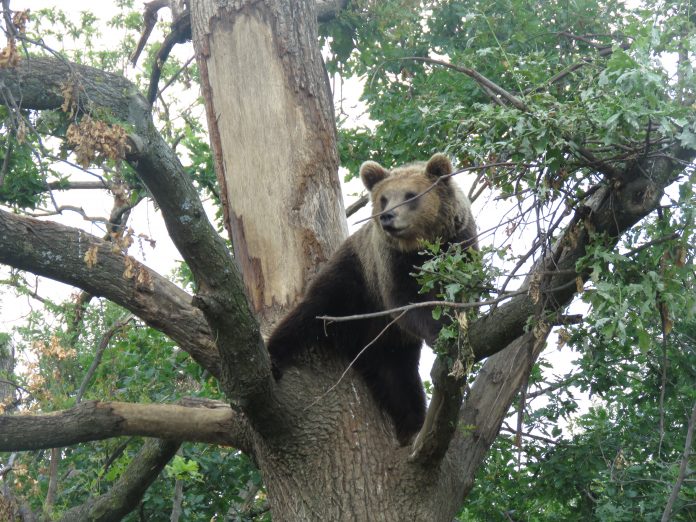 Betsy is eating a morning snack of ripe apricots in her enclosure in the Carpathian Mountains.

The female brown bear was rescued from captivity in Texas and brought to Transylvania to the Libearty bear sanctuary in 2010 to start a new life in protected wild surroundings.

She is one of 105 of bears living in the 70-hectare enclosure of oak and hazel forest in the mountains of central Romania who was saved from a life in captivity.

It’s the biggest bear sanctuary in the world for brown bears, a fitting accomplishment as Romania is home to an estimated 6,000 brown bears, the largest population in Europe.

During a visit this week, Britain’s Ambassador to Romania, Andrew Noble, said the sanctuary was “important because most people have heard about bears, but few people have actually seen them in nature,” he told universul.net.

Groups were queuing to buy tickets one morning this week, but it isn’t ‘business as usual’ at the sanctuary in these strange times.

Even more so now. Before the coronavirus pandemic spread to Romania, Zarnesti could expect 30,000 visitors a year who would see the bears in their fenced-off enclosures in guided tours. This year, the sanctuary is hoping to attract just 5,000 visitors, said Paula Ciotlos, vice president of Millions of Friends, the non-governmental organization which supports the sanctuary.

Betsy is a graceful creature, but like all the other bears, her life has been blighted by pain.

In the U.S. “she was fed with scraps of McDonalds and she has big problems with her digestive system,” Ms. Ciotlos told universul.net. “She had to be separated from the other bears and now has her own luxury pen,” which can be viewed from the Bear Museum, a collection of donated stuffed bears.

The sanctuary was set up in 2005 with the help of a British charity, and in 2006 National Geographic named it the most ethical sanctuary in the world. It strives to keep standards high. “This is not a zoo,” I am told when asking about opening hours.

Some of the bears are so traumatized by their previous lives that it takes time for them to adapt. Some bears never hibernate, even in their new home of fresh water pools, hibernation dens and hundreds of trees, just outside the town of Zarnesti, half an hour’s drive south of Brasov.

The first bears to be rescued were Cristi and Livia, a couple that eked out a miserable  existence on a hard concrete floor at the back of a restaurant. Their sole purpose was to entertain tourists in the upscale resort of Poiana Brasov, not far from the tranquil surroundings which later became their home.

Livia, who is easily recognizable with her almost blonde fur, darts about one of the enclosures in the early morning sun with a handful of younger furry friends during our visit.

Romania outlawed the keeping of wild bears in 2005 as it prepared to join the European Union. It brought in a new law that meant a certain standard of animal management. Many zoos could not comply and the bears in these zoos faced euthanasia,  but were saved by being re-homed in the bear sanctuary. Others were rescued from restaurants and private owners.

Most of the bears at the sanctuary are Romanian, but some have been rescued from as far afield as Armenia and Texas.

As delightful as these large creatures are, it is clear even to the casual visitor that you wouldn’t want to meet one in the forest on a dark night. They can run and climb faster than any man, (60 to 70 km an hour), their dark talons embedded in huge paws are sharp and long, and their sheer mass make them a formidable force of nature.

It would be easy to forget the cruelty that brought them to Zarnesti. They endured years of neglect, cooped up in tiny cages with a concrete floor for a bed, malnourished, beaten, made to ride bicycles at circuses, or doped with beer and tranquilizers to keep the tourists throwing spare change and leftovers.

The care, respect and love they receive at Libearty extends their lifespan to 30-35 years, ten years longer than if they were in the wild, Ms. Ciotlos says.

Adult males can weigh 135 to 250 kilograms and females range from 95 to 200 kilograms, but they are tiny balls of fur when they are born weighing between 500 and 800 grams, depending on litter size. All male bears are sterilized when they come to the sanctuary which uses the service of a local veterinarian as needed.

The sanctuary which has 14 employees is run by the non-governmental organization Millions of Friends.

Like humans, bears have different personalities. One large bear climbed a tree and rubbed its back, displaying its agility to visitors this week. Bim and Bam are brothers who were abandoned by their mother who was “likely killed”.

“They sucked their toes like orphans,” Ms. Ciotlos says. Betsy seems a peaceful creature, others are playful and indulge in mock fights.

The bears also get a boost from celebrities such as British singer Leona Lewis and Evanna Lynch, the Irish actress who played Luna Lovegood in the Harry Potter films, who last visited the Libearty sanctuary in 2019. French actress Brigitte Bardot also donated a bear to the Teddy Museum.

The bears eat 2 tons of food a day, fruit and vegetables (except cabbage and peppers) and 30-kilogram blocks of ice cream made with bio milk. Supermarket chains donate some of the food. The sanctuary buys meat for them without salt, pepper or spices.

It’s a healthy diet, a far cry from Betsy’s McDonalds leftovers, and dregs of beer.

The sanctuary was created with funding from a variety of sources, including from the British charity World Society for the Protection of Animals – WSPA, now renamed  World Animal Protection also designed the sanctuary and helped train the staff.

Ambassador Noble is personally sponsoring three bears and spoke as visitors got ready for a guided tour.

“They have 21 hours without humans and 3 hours with. What they really, really need now are visitors,” he said.