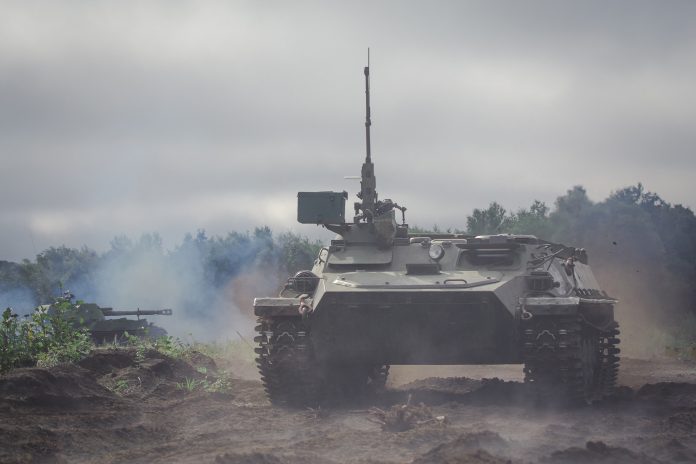 Until now, Idlib was never the focus of international attention in the Syrian war. But its strategic importance in the US-Russia-Turkey conflict calculations means it has grown in importance in recent months.

Geographically, the Bosporus is the gateway of Europe, on Turkish land, to Asia. Geostrategically, however, the passage is located here, in the Idlib region, a thorn in the border with Turkey.

The territory now acts as an „office” for Ankara’s hegemonic claims. However, it must be emphasized, the claims have some substance.

At the time of the Sublime Porte, Idlib was the heart of the Ottoman olive oil industry and a prosperous trade route for cotton merchants, administratively integrated into the vilayet of Aleppo. In the year 1920 there was a treaty: the Treaty of Sèvres, which put an end to the Ottoman Empire, signed by the Allied Powers in the exhibition hall of the famous china factory in France.

As the porcelain breaks when it falls off the shelf, so the Ottoman Empire became the „sick of Europe.” Syria was placed under French mandate, and as well as other ex-Ottoman territories it was one that would become Recep Tyyip Erdogan’s dart board for decades: Kurdistan; more specifically, Northern Kurdistan or Turkish Kurdistan.

The Treaty of Sèvres provided for the establishment of a Kurdish state only on the territory of future Turkey. A marathon of controversies began among the Kurds who were unhappy with the borders. The quarrels did not produce any results, but the territories inhabited by the Kurds were blocked inside a nebula. The Treaty of Sèvres did not have a long life, and was replaced in 1924 by the Treaty of Lausanne, whose map is still at the base of the Turkish-Iraqi border and which divided the Kurdish-occupied territories into three sections: one was given to Iran, one to Syria and the last one to Turkey.

What were the wishes of the Kurds pertaining to the establishment of a state? They were left aside to be managed by another century, prone to an uncertain future. According to Goncalo M. Tavares, politicians are mechanisms that forget the reality.

A kind of A, B, C of the situation

Well, in the 21st century, the Idlib region is condemned to drift, driven by these old unresolved problems. The Syrian province is currently an outpost of the anti-Assad Tahrir al-Sham rebels, an organization linked to al Qaeda.

For a better orientation in space, it is necessary to group the actors involved in fighting to the east and west of the Euphrates River in Syria:

– east of the Euphrates: the area of ​​U.S. military influence extends;

– east of the Euphrates: Syrian Democratic Forces (SDS) deal the cards in alliance with the US;

– FDS, which is the paramilitary puppet of the PKK (Kurdistan Workers’ Party), is considered a terrorist organization by Turkey and a threat to its national security; therefore, the subject of permanent disagreements between Ankara and Washington;

– west of the Euphrates: the area of ​​military influence of Russia and, by extension, of the government troops of Bashar al-Assad;

– Turkey is accustomed to conducting military operations east of the Euphrates, to the annoyance of the United States.

In the game of chess played by the international forces involved in the Syrian conflict, Turkey has now slipped into a grievously difficult position. An elephant’s dance on the wire.

In September 2018, Turkey and Russia agreed to create a security zone (demilitarized zone) in Idlib, encompassing the eastern Euphrates and the territory controlled by the Tahrir al-Sham rebels.

On the other hand, until the end of the „decantation process” of the demilitarized zone, Turkey was responsible for being a referee between the radicals and moderates, preventing them from killing each other, while Russia, from as the negotiator of the Syrian government, promised to keep Bashar al-Assad at bay. Meanwhile, the both countries’ military would provide common patrols along the demilitarized zone demarcation line.

In short, everything sounds nice, in theory that is. However, when tested in reality, this attempt turned to dust in less than a year, and Turkey found itself back to square one, to the frustration of the „Sultan” Erdogan.

Now, Turkey is trying its luck in tandem with the U.S. An agreement to establish a demilitarized zone was signed in August between Ankara and Washington, but its implementation is progressing slowly, much too slowly.

A quote from the Chief of Mossad

Idlib is on quicksand; any diplomatic action here seems doomed to failure since the air is so tense that it depends on who fires the first bullet.

The ideal option for Erdogan would be for the U.S. to withdraw its troops as quickly as possible from the east of the Euphrates, so that Turkey – fortified, or not, by the Kremlin’s „green men” – could, along with Arab rebels, freely attack the military pawns of PKK. Even though the Kurdish troops, rigorously trained by the Americans, are recognized for their almost exceptional military training, it is hard to believe that they will be able to withstand the second largest army in NATO. On the other side, Trump seems to be opting for a slow military withdrawal, somewhat trying to keep Erdogan in limbo, but without causing him to move his „stuff” to Putin’s camp.

According to the experts in the Middle East, the Turkish leader does not conceive of the demilitarized zone as a mere antiterror buffer zone, but seeks to model it politically in the form of a „unlicensed” border in Syria, in sovereign key, which would allow it to reach two goals: 1) the freedom to negotiate as an independent actor with Russia and the USA, mano a mano, in case of a possible division (through governorates or other administrative-territorial molds) of the spheres of influence in Syria; 2) the strengthening, through various political dependencies, of the demilitarized zone so that it becomes a cordon of Turkey’s hegemonic power over Syria.

Let us remember what Mossad’s Chief, Yosi Cohen said not long ago at a meeting with Directors of the Gulf countries’ secret services. Namely: „Iran’s power is fragile in Syria. The real threat comes from Turkey.”

Only, meanwhile, the U.S. and Turkey have moved their quarrel related to the acquisition by Ankara of the Russian anti-aircraft system S-400 into the NATO court, leading to the exclusion of the Turks from the F-35 program. ‘No problem,’ says Moscow, rubbing its hands; we will fill the gap left by the F-35. Putin and Erdogan recently discussed a possible cooperation between Turkey and Russia for the purchase of SU-35 military aircraft. Voilà!

Nevertheless, the ease with which the Turkish President lets Putin force his hand in the procurement of Russian military technique seems odd at least. Is it because it involves a juicy promise about the Kurdish problem in the east of the Euphrates?

A note: the purchase of the S-400 package is a Trojan horse that is to be integrated, as a „naturalized” element, in NATO’s defense at the military block level. Turkey cannot buy ballistic toys only as a „private country.” When you are in a military alliance, any such move impacts the entire alliance.

General Ismail and the „secret alliance”

Interesting signals come, however, from a second plan, from the press controlled by the Turkish Government. The pro-government daily Millyet, which traditionally acts as an unofficial mouthpiece of the Turkish Presidency, recently interviewed General Ismail Hakki Pekin, the former Head of the Turkish Intelligence Service of the General Staff, who uttered the hypothesis of a „secret alliance” between the US and Russia in the theater of operations in Syria.

Ismail Hakki Pekin: „No one wants Turkey to have any influence at the negotiating table. Another aspect is that both attacked each other not directly, but through other states and using their intelligence services. Therefore, in the west of the Euphrates, Russia is influential, and to the east of the Euphrates, America … When it comes to an attempt by a third party to intervene, both states oppose and prevent the intervention. That is, Russia is not thinking of joining Turkey and participating in an operation. If Turkey acted by itself to the east of the Euphrates, Russia would open its channels with the U.S. It could be contacts between Russia and Turkey, but it is not clear whether Turkey would ultimately be by itself or supported by Russia.”

To sum up the framework and the symptoms: when Idlib really begins to boil, the Balkan borders of the EU will be off their hinges again; they will again be hit by a refugee crisis. For on this territory is where you will find the epicenter of the refugee camps on the Syrian front – more than half of the two million people forced to flee the war, according to UN statistics. With one amendment: add this figure to the more than three million Syrian civilians living throughout the region who could take to Turkey at any time.

„Idlib is a gigantic area of ​​displacement,” was the way Jan Egeland, Head of the UN humanitarian mission for Syria, described the situation in 2018.

The failure to impose a demilitarized zone has already led to the overflowing of more than 250,000 new refugees to Turkey, which is already suffocated by the Syrian refugees from the previous waves.

Do we still have to close our eyes and imagine what would happen again if Turkey made the decision to open a „valve” on the border with Bulgaria?