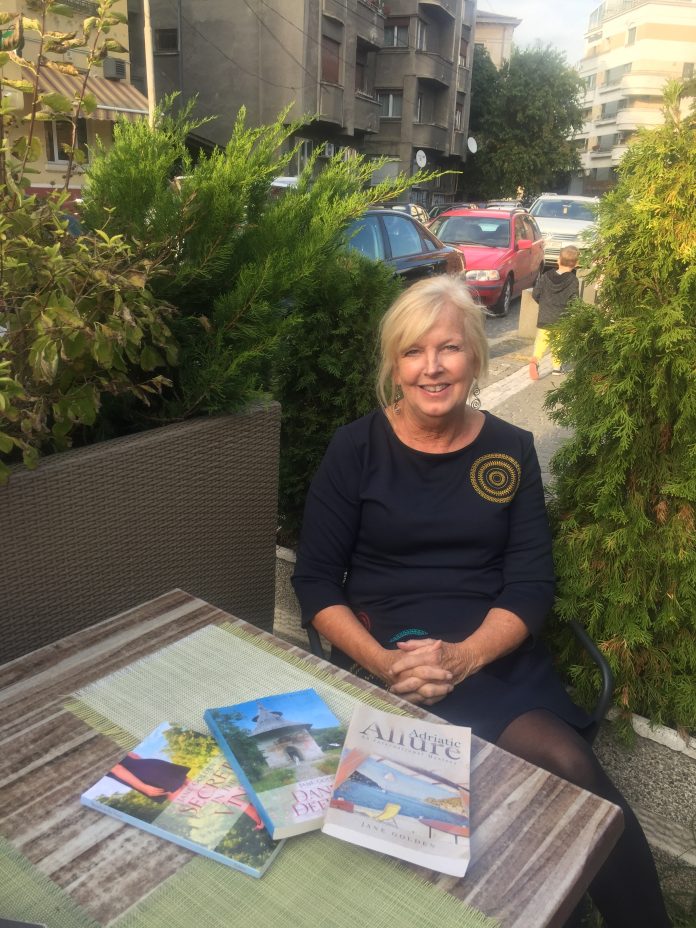 Jane Golden fell in love with Romania and when she returned to the United States, she quit her job as a lawyer and used the inspiration to write thrillers to share the charm of a country that most readers had never visited.

It was a novel way to share her experiences and affection for the country she called home for 2 1/2 years. Golden, who lives on the Gulf Coast, has published three travel mysteries set in Romania: Secrets in the Vines, Danube Defiance and Adriatic Allure.

Before being a lawyer, Golden studied to be a journalist but “law was a more practical solution.” A perceptive observer of people and society, she says she “journaled the whole time I was here in Romania to give background color. You have an authenticity you rarely see in fiction books.”

The books are “fast-paced and enjoyable” written in the first person with a protagonist Jeni, a lively “expat wife who is curious and involved. These are positive traits,” she says.

“My audience is people who enjoy traveling and learning about different places and those who like a good mystery. Most say it makes them want to visit. “

“When I lived here, I was immersed in the Romanian culture and day-to-day life and politics; I tried to present things I saw with a light touch… I deliberately avoided doing a heavy treaty on Romania_ I wouldn’t be the best person to do that,” she says.

Golden came to Romania with her husband, a U.S. diplomat, and left in 2014. She was a member of various expat groups but digs deeper than the average foreign woman who comes to town with her family.

Some of the characters she encountered have ended up in her books. “They read the books and laughed.”

Back in Bucharest, Golden met with universul.net to talk about how her writing presents a different picture of Romania to an international audience more accustomed to orphans, Dracula, corruption and the Holocaust. While accurate in themselves, they show only part of the story and aren’t what you’d call light reading.

Golden’s first book is about wineries “something foreigners like to find in countries. Romanian wines aren’t sold in Western Europe or the United States and it allowed readers to say ‘Aha! I’d like to go and visit those wineries.’ I particularly like Romanian wines,” she adds.

But she also touches on weightier topics. “I talk about the complications of property ownership after the fall of communism and I talk about how it’s a safe country. Though I have murders in the book, they are made up,” she laughs.

“I touched on the communist past which is essential part of the story about the present; I write about parking and driving and you have to tell enough of the history to put the present into context.”

The second book, Danube Defiance, is about a foreign correspondent and is a travel mystery about art and history. “I wanted to take people out of Bucharest. It’s a beautiful travel guide without being a ‘travel guide’ (and goes to), Constanta, Brasov and the painted monasteries.”

Throughout her books: “I try to instill the sense of grace that Romanian women carry themselves and the effort Romanians put into everything they do that makes them unique. The simplest home will have a beautiful garden like a painting.”

She says the critically acclaimed books which have sold well “work for an American audience because the protagonist is seeing Romania with an American voice and that’s what makes it marketable.” That said, “older Romanian women living in the U.S. really enjoyed reminiscing about their country.”

Her second book Danube Defiance features a painted monastery on the cover has “more humor in it. It’s the most interesting. People who like it, love it, “she says. “To get people to read it is hard, but everyone who reads Adriatic Allure (the third book) likes it. It was Editors’ Choice and I was named a rising star. Her books are available on Amazon.

She’s a fan of Romanian fashion is wearing a fetching navy dress with embroidery for our meeting at a Bucharest café.

Golden has striking blonde hair and green eyes and looks shrewd. She comes from Mississippi like “William Faulkner and John Grisham.”

She chooses her words carefully when speaking; it could be that her work as a lawyer has made her both a shrewd observer of human behavior and aware of the value of words. You can tell that she’d have made a good journalist had she chosen that path. But fiction is her preferred genre.

“Every line in every book is intentional.  I don’t have filler; I don’t do filler,” she says repeating it for emphasis. “I don’t mention vampires, Dracula and other clichés I can think of.”

Why books? “Nobody wants to see a slide show and your pictures,” she says. You’ve got just five minutes to talk about your two years in Romania.”

“It is a love story. I have no goal other than to change people’s opinion, if they have a negative opinion, then my goal is to change that. I consider Romania to be my second home.”

Golden says her books could be adapted for the big screen. “They are good plots for movies, but I would want to make sure they have the authenticity and accuracy that I have in my books.”

She wishes that more foreigners would visit Romania but “You can’t see Romania in 48 hours off a cruise ship. Everyone who wants to do a cruise, I say: Don’t do it! Don’t do it!”

“Romania is like a flower that you keep peeling away and there’s something better underneath.”