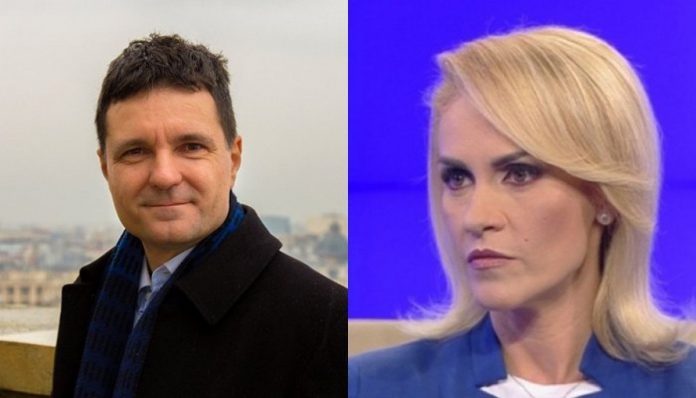 Gabriela Firea and Nicusor Dan are poles apart but close in the polls. Their politics, personal style and vision for the capital of (probably) 2.3 million are about as different as you can get.

The only areas where they are close, very close indeed, are their ages: She is 48 to his 50, and more importantly where they stand in Sunday’s race for mayor of Bucharest. It’s a race that is too close to call.

Ms. Firea has the head start, and it is her race to lose. And lose she did. Mr. Dan unexpectedly won 47.2% in the race and Ms. Firea 30%, the CURS-Avangarde exit poll showed.

Gabriela Firea has run the higgeldy-piggedly, dusty and charming capital for the last four years and knows the ropes. There are as many as 45,000 people who have jobs at municipal companies, not to be underestimated in these uncertain pandemic times.

Ms. Firea is a quick, shrewd and populist operator, and can rely on a variety of television stations to get her message across. Her former career as a television journalist means she knows the tricks of the trade.

On Sunday morning, as polls were opening, she appeared three hours earlier than announced, to vote. “I’ve always loved mornings,” she exclaimed. Pure Firea, whose surname phonetically sounds like “Be nasty!” in Romanian.

If her fans admire her energy and drive, her detractors call her “the wicked witch” and are longing for her to disappear in a puff of smoke after Sunday.

It is in part a testament to her skills as a politician that the race is so close, for her performance in the last four years has been dire, many say.

She has been accused of heading a huge web of corruption, mismanagement, and incompetence. She has been called to defend her record tackling air pollution and traffic congestion in the capital where nobody knows exactly how many people live.

Making matters more complicated is Traian Basescu, the former president, who wants another stab at mayor, a post he held from 2000 to 2004. He is in third place and will take votes from Mr. Dan, making the race hard to predict.

Mr. Dan, a softly spoken former civic activist and mathematician is running  for mayor of Bucharest for a third time. He comes across as calm, to Ms. Firea’s hyper.

Mr. Dan is a modern politician, thoughtful even. He made his name on a campaign to save old buildings from disrepair and dereliction. Architecturally, Bucharest is an eclectic city with a host of crumbling old buildings, many of which would be historical monuments in other countries.

His message resonated beyond the aesthetes as Ms Firea moved to close the popular Fabrica restaurant and general hangout spot and replace it with another storied building.

It was a high-rise building too far, and Mr. Dan managed to gather enough support to stop the plan and save Fabrica, beloved by families, hipsters, couples and anyone who’s had enough of “fitze” a noun meaning “showing off.”

Even if Mr. Dan isn’t wildly charismatic, and has no experience of public office, he’s chilled out, perseverant and represents the future of the city and Romania, while Ms Firea is rooted in its past, her critics say.

Romania has been a member of the European Union for 13 years and mentalities have changed since the post-communist years.

Last year, Ms Firea opposed a pediatric cancer hospital which was being built with private funds and sponsorship.

Even if the state spends less than most other EU countries on health and its hospitals are struggling to cope, she slammed the project and the non-governmental group behind it. Her message resonated with some, but not with others.

The outcome of the race however is not merely down to popularity, but turnout. The fewer voters that cast ballots, the better it is for Ms. Firea, while Mr. Dan needs to give his voters a reason to get out.

“I’ve been waiting for a long time for this vote. I was panting to vote, to get rid of the tentacles of personal interests which have kept this city in an undeveloped state, so that we don’t even have hot water, let alone the traffic or pollution,” Mr. Dan said

We will know by evening whether he has won enough votes to try to put his vision into practice.