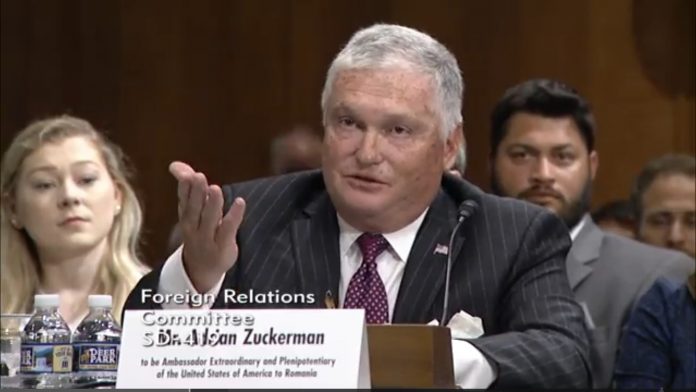 Tonight, the US Senate oficially confirmed Adrian Zuckerman, a Romanian-bord New Jersey lawyer nominated by Donald Trump, as the new US Ambassador to Romania. The final vote tally was 65 for and 30 against. President Trump will notified of the Senate’s decision.

Adrian Zuckerman will start his mission in Romania, the country of his birth, before 15th of December.

The new US Ambassador to Romania is an immigrant, having arrived in the United States when he was just 9 years old, in 1966. He accompanied his parents, which fled oppressive communist regime in Romania to give their son the chance of a better life.

Adrian Zuckerman told the emotional story of his early life during his hearing in United States Senate Committee on Foreign Relations.

„I am humbled and very grateful for the confidence President Trump has placed in me. I am also thankful to all of you for your consideration. Please allow me to introduce my daughter, Natalie. She is a graduate of the University of Edinburgh and has always been interested in our family’s Romanian heritage. We traveled there together when she was in high school. To me, she represents our future and I am fortunate she is with me here today.

My voyage starts with two people who are here in spirit only: my beloved parents, Emil and Aura. Were it not for their courage, wisdom, and sacrifice, I would not be here. Both were teenagers in Bucharest during the Second World War. Like so many of their contemporaries, their families were dislocated and their property was confiscated. Against all odds and in the face of persistent anti-Semitism in the post-war communist regime, they both attended college and medical school.

Emil became a senior academician and researcher at the University of Bucharest. He achieved international acclaim for his research on epilepsy. Aura pursued research in the field of endocrinology. Shortly after I was born, my parents, aware of the brutal shortcomings of the communist system, decided their only child should have the opportunity of a better life.

Upon filing a request to leave Romania, they were terminated from their elite academic positions. They began a new life on the edge of poverty, living from hand to mouth. I remember the occasional gratitude of my parents’ patients bringing a fish or a live chicken. We lived on the fourth floor of a walk-up building, in two small rooms, each heated by a wood burning terra cotta fireplace.

The heat stored in the terra cotta never lasted through morning. Water for bathing was heated in a pot on a bottled gas stove top. We were finally allowed to emigrate when I was nine years old. We left with little more than the clothes on our backs. We were not allowed to take any valuables or currency, not that we had anything of consequence. Following friends’ advice, my parents took two salamis that could be either sold or eaten when we arrived in Rome, Italy.

We remained in Rome for the next nine months while my parents sought work in the United States. My father was finally offered a position as an assistant professor of medicine at Yale Medical School. Arriving in New Haven, Connecticut in May of 1966, we started living the American dream. My parents worked as physicians and I enrolled in third grade and started learning to speak English.

My parents were beyond proud to seek American citizenship. Emil and Aura pursued the American dream with the vigor, zeal, and energy of wide-eyed youngsters. I remember their joy at buying their first car, their first house and the ubiquitous backyard staple – the barbecue. Their proudest day came seven years later when they actually became American citizens.

They cherished American values – a belief in hard work and a better future, a regard for freedom of speech, and the utmost respect for life, liberty and individual rights. They made sure I always knew and remembered to appreciate and live by these hard-fought for principles.”

During the same hearing, Adrian Zuckerman spoke about his views on Romania and the objectives of the term as Ambassador.

„Romania shed its horrific Communist regime in December 1989, less than thirty years ago — a day I had always hoped for, but never thought I would live to see. However, the Romanian democratic state is still in its infancy.

Romania is of great economic, military and geo-political strategic importance. Located in southeast Europe, it is an economic entry point to Europe and a staunch American military ally. Since 1989, Romania has established a democratic parliamentary form of government, joined NATO, joined the European Union, and has become a strategic ally of the United States.

The strongest aspect of the U.S. – Romania relationship is our military cooperation. There is an American Aegis Missile Defense battery at Deveselu; U.S. Army personnel are rotationally deployed at the Mihail Kogalniceanu joint military base; U.S. Air Force units routinely deploy to Romania; and U.S. naval vessels dock at the Black Sea deep water port of Constanta.

In addition to being a committed partner of the United States, Romania is a wonderful host and partner to other NATO member states forces. Romania is a robust contributor to NATO missions and operations in Afghanistan, Iraq and other countries. Romania is already the 4th largest contributor to the Resolute Support Mission in Afghanistan, and at the recent NATO Summit in Brussels it pledged additional substantial commitments to the mission in 2019.

Romania has undertaken to meet its financial commitment to NATO and has made major strides toward this goal. Romania has also stood in solidarity with the United States to condemn Russian intervention and aggression in Ukraine, Romania’s neighbor. In addition to supporting American sanctions against Russia, Romania has provided various humanitarian and development aid to Ukraine, and strongly supports its independence, sovereignty, and territorial integrity.

The Romanian economy has been among the fastest growing in the EU, and our trade and investment relationship has been increasing as well. There are approximately five hundred American companies conducting business in Romania, including Fortune 500 companies, numerous smaller companies, and a continually growing number of information technology companies.

Romania is a country of abundant farmland, minerals, oil, natural gas, and other natural resources, and it is blessed with a well-educated, multilingual and industrious populace. In addition to its onshore oil and gas reserves, recent exploration in the Black Sea has discovered substantial off-shore oil and gas reserves, which have the potential to bolster Romania’s energy security. The Romanian education system, with high-quality schools and universities, has produced an educated workforce and internationally respected professionals.

Although much has been achieved in Romania, there is still room for improvement. In order for Romania to further the incredible progress it has made over the past 29 years, Romania needs to continue to fight against corruption, create a more investment friendly business climate, invest in infrastructure, health, and education, and strengthen public administration. Investors want a relationship with Romanian decision-makers based on mutual trust. They seek a business climate that enables their businesses to contribute to Romania’s sustained economic growth, to create jobs, to earn profits, and to grow their enterprises.

If confirmed, I would offer continued support for Romania’s noteworthy anti-corruption efforts. Fighting corruption and supporting judicial independence are vital to the region’s long-term prosperity and security, as well as to the extraordinary law enforcement and security cooperation that exists between the United States and Romania.

There is much work to be done to foster, support, and encourage democratic institutions. The perils of an aggressive Russia seeking to destabilize democracies in Europe, from within and without, are substantial and cannot be underestimated. I am confident that with proactive American leadership, assistance, and friendship, Romania will meet these challenges and prosper.

If I am confirmed, I pledge to use all my energy to advance our country’s interests in Romania. I will apply all of my experience and knowledge to address the issues and vulnerabilities Romania faces. I look forward to bringing the American values I was lucky enough to be raised with to the country from which I hail.

Thank you for your consideration which will allow me, if confirmed, the opportunity to serve and repay, at least in part, the enormous debt of gratitude I have for everything America has given me and my family.” 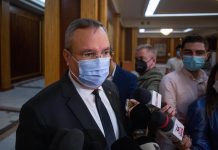 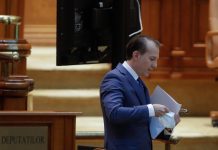