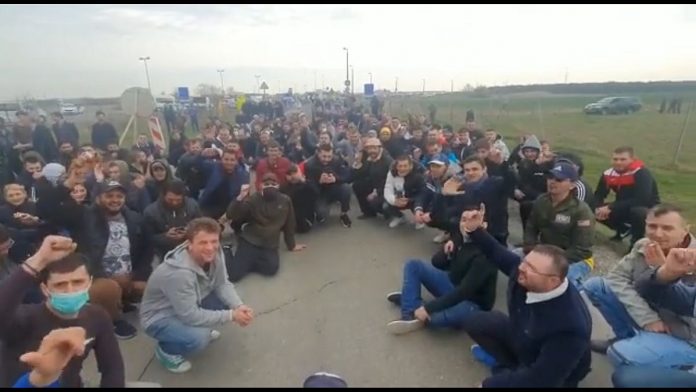 Some 5,000 mostly Romanian travelers have crossed the western border in the past 24 hours after Hungary agreed to ease travel restrictions to allow Romanians transit its territory overnight.

Overall, 17,000 Romanians who were stranded at the Austrian-Hungarian border since March 17 have reached Romania after Hungary’s Prime Minister Viktor Orban agreed, following consultations with Romanian officials, to allow travelers to transit between 9 p.m and 5 a.m every day. Hungary closed temporarily closed its border with Austria this week.

But tensions remained between the neighbors over the situation. Hungarian Foreign Minister Peter Szijjarto was in the Romanian city of Cluj on Friday where he called on Romanian authorities to adopt measures to slash the waiting time at the border, so „we don’t have lines of vehicles stretching back for dozens of kilometers,” Mediafax news agency reported.

Matei said traffic was light on Thursday afternoon, but there were lines at the border by Friday morning. It took an average of two hours to cross the border,  although seven lanes were open.

Border crossing was slowed with authorities questioning people where they came from. People are obliged to stay in quarantine for two weeks if they have come from high-risk countries where more than 500 cases have been reported.

There are millions of Romanians living in Italy and Spain, which have been hard-hit by the coronavirus epidemic and some trying to return to Romania  from those areas and are placed in quarantine.

President Klaus Iohannis appealed to Romanians to not come home for Easter this year as Romania battles to contain the spread of the coronavirus, which has infected 277 people. Iohannis decreed a 30-day state of emergency on Monday to fight the virus outbreak

Romania is the European Union’s second-poorest country, and at least 4 million Romanians work abroad, according to estimates.

Hungary is one of the 26 countries in Schengen passport-free zone which allows people to move freely between EU countries without border checks, but several countries like Hungary have unilaterally closed borders in recent days in a bid to stop the spread of the coronavirus.