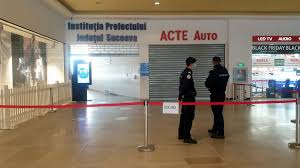 Bribes of up to 7,500 euros were paid to police officers, driving examiners and other officials in exchange for driving licenses or registering vehicles which weren’t fit for the road, Romanian prosecutors said Friday.

Prosecutors from the anti-corruption unit said Friday they have dismantled a criminal ring which operated from 2018 to this year in the northeastern region of Suceava.

They said the group gave driver licenses to individuals who hadn’t passed the test and were involved in the fraudulent registration of automobiles.

Members would get between 300 and 1,500 euros to help candidates pass the practical driving test, while they received bribes ranging from 3,000 to 6,000 euros for the written test, prosecutors said.

The group also facilitated the registration of second-hand imported cars that didn’t meet the technical requirements to be driven on the road.

They either signed off that the vehicles had passed the technical requirements demanded by the Romanian Auto Registry and handed out provisional or permanent registration papers in exchange for bribes from 200 to 1,000 euros, prosecutors said.

Prosecutors searched suspects’ homes and confiscated over 1.4 million euros in cash plus luxury watches and cars.

The case has reportedly caused tension with Romania’s interior ministry which oversees the police.

„Evidence shows a ring was set up to intermediate the obtaining a driving license by cheating on the theoretical and practical parts of the test by paying sums of 5,000 to 7,000 euros for a permit,” police spokeswoman Monica Dajbog said on Friday.

“The suspects include employees of the Driving License and Vehicle Registration Service in Suceava and other people…. who were involved in obtaining the permits,” she added.

Romania and Hungary are tied as the second most corrupt members of the European Union after Bulgaria according to Transparency International monitoring,