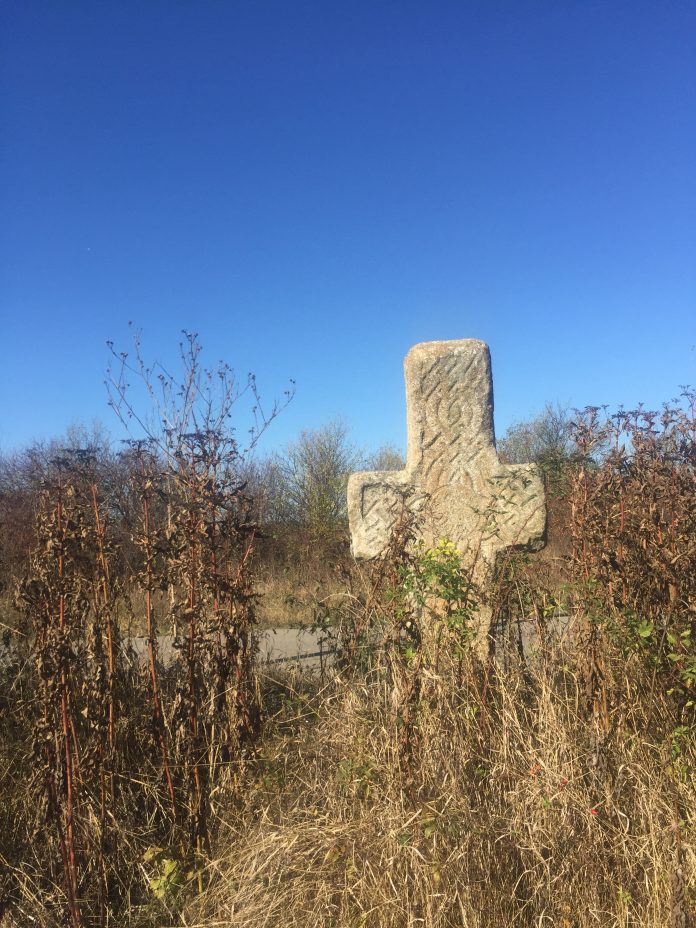 A field just outside a village about 40 kilometers south of the town of Targoviste may be the place where Romanian medieval prince Vlad Dracul was killed almost 600 years ago, a historian and others believe.

Details about when Vlad Dracul was born and where he died remain sketchy. Historians say he was born about 1395 and met his death in Balteni, a village in Wallachia, in today’s southern Romania. The question is which Balteni. A village in Ilfov county, or the one in the county of Dambovita?

Some are questioning whether a solid stone cross standing more than two meters high, adorned with intricate carving may be the place where he was murdered in 1447. It has no memorial plaque or other identification and is surrounded by weeds and unkempt foliage. It looks out of place on the country road which is dotted with modern villas.

Alexandru Marian Nicolae, the mayor of Contesti, a larger village which oversees Balteni, has been trying to get expert advice on whether it is the actual spot where Vlad Dracul was killed in the mid-15th century by the forces of Ioan de Hunedoara, commonly known as Iancu de Hunedoara.

His queries came after respected medieval historian Prof. Constantin Rezachevici cast doubts on the accepted version that Vlad Dracul was killed farther south in the village of Balteni, in Ilfov county.

The Romanian Encyclopedia has a chapter on Vlad Dracul based on the writings of Romanian historian Dinu Giurescu. It says Vlad was captured and decapitated in Balteni “probably Balteni in Ilfov.” And that has become the accepted version.

Rezachevici disagreed. “The Balteni where Vlad Dracul was killed is not the one in Ilfov, but the one in Dambovita county between Contesti and Racari, halfway between Targoviste and Bucharest.”

“That is where Ioan de Hundeoara’s soldiers who were coming from Targoviste they had their military base on 4 December 1447,” Rezachevici wrote.

British Matthew Beresford takes up the idea in his book “From Demons to Dracula, the Creation of the Modern Vampire Myth” saying “documentary evidence suggests Iancu de Hunedoara travelled south from Targoviste and caught up with and killed Vlad Dracul before he reached Bucharest”

Looking at a recent picture of the cross,  Vlad Zigarov, who has a master’s in history at the London School of Economics, said: “It looks like it is a site of where something important happened,” he said. “Over the centuries, people may not have remembered exactly what happened there, but they knew it was something important.”

“The cross is probably from the 19th century, but it is connected to something that happened probably long before that. It’s a big cross with very intricate work,” meaning that something of major importance happened there, he said.

WHO WAS VLAD DRACUL?

Prince Vlad Dracul or Vlad the Dragon was the voivode of Wallachia from 1436 to 1442 and from 1443 to 1447.  He’s best known as the father of Vlad the Impaler, the Romanian medieval prince who inspired the Dracula legend in the West. In Romania, some consider him a hero in for his harsh punishment of enemies and crooks whom he impaled on spikes, hence the moniker.

The elder Vlad was a member of the Order of the Dragon, a military fraternity founded to fight the Turks.  Sigismund made him a ruler of Wallachia and allowed him to settle in Transylvania. After his half brother died in 1436, Vlad seized Wallachia with Hungarian support.

He later joined Ioan de Hunedoara, the voivode of Transylvania, in a crusade against the Ottomans, and he was eventually captured in 1442 where he promised to be a vassal of the Sultan and gave up Vlad the Impaler and another son to the Ottomans as hostage. The elder Vlad was released the next year and restored in Wallachia with Ottoman support.

Vlad remained neutral against the Ottoman Empire but later sent 4,000 soldiers on horseback to fight against the Ottomans in Varna and captured a fortress in Giurgiu. He made peace with Ottomans but his relationship deteriorated with Ioan de Hunedoara.

Later, Ioan de Hunedoara invaded Wallachia, forcing Vlad to flee from Targoviste, and he was killed in a nearby village of Balteni.