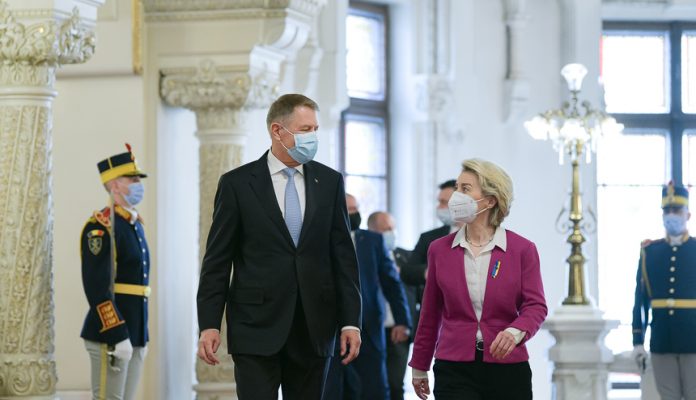 European Commission President Ursula von der Leyen on Thursday said the EU would set up a humanitarian hub for Ukraine in Romania.

„We will deploy at least 500 million euros from the EU budget in humanitarian assistance,” she said after a meeting with Romanian President Klaus Iohannis in Bucharest.

The Romanian president said it would be „a big and complicated” operation and would take several weeks to set up.

There was no word on where it would be located.

The European Commission chief  thanked Romania „for directing aid received from all over Europe to border crossing points towards Ukraine.”

She said: „protecting the people fleeing (Russian President Vladimir) Putin’s bombs is not only an act of compassion in times of war. This is also our moral duty, as Europeans. Romania is doing the right thing,” in a message posted on Twitter.

Romania’s Prime Minister Nicolae Ciuca said that almost 50,000 Ukrainian refugees were currently in Romania a week after the war began, including 18,000 children.

Ms von der Leyen praised „Romania’s solidarity with Ukraine and the victims of the war (which) offers some light in this dark hour.”

„We will always remember the determination and bravery of the people in Ukraine. They are an inspiration to us all,” she added.

„Llikewise, we will never forget the solidarity of Romania and of the other EU countries welcoming those in need of protection.”

More than 1 million people have fled Ukraine in one of the „swiftest refugee exodus this century,” the United Nations said Thursday.