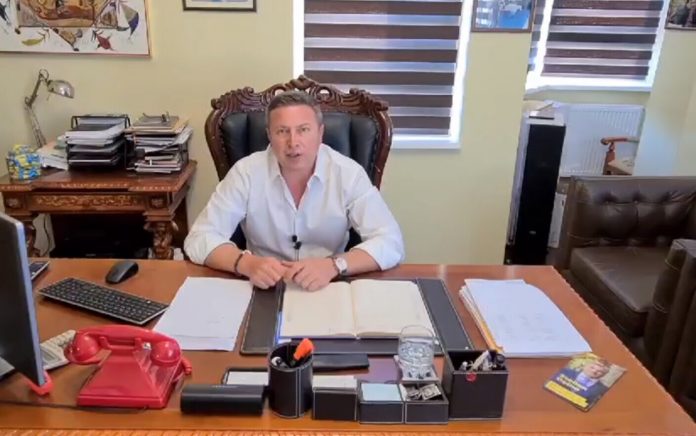 A film of a mayor forcing his naked daughter to recant her behavior has shocked Romanians, in a country where corporal punishment is illegal, but still widespread in families.

A video appeared on Wednesday of the 14-year-old girl kneeling on the ground with her face to the wall and her arms held above her head and being made to apologize for not behaving properly and promising to be “good” in the future. It was unclear what the girl had done to incur the treatment.

The video became the main news story on many of the country’s news channels on Thursday less than two weeks before elections. It was later removed by YouTube for violating rules.

Traian Ogâgău, the mayor of the Transylvanian town of Sângeorz-Băi, said he filmed the scene himself during a ski trip and sent the film to the girl’s mother whom he is separated from. He can be heard calmly instructing the distressed youngster to repeat his words in an apparent bid to humiliate the girl.

But Ogâgău defended his actions, saying it was his private life and his right as a parent to discipline the teen. He even quoted from the book of Proverbs in the Bible with the verse: “Those who spare the rod of discipline hate their children.”

The images have caused an uproar ahead of September 27 elections in a country where some children are kept on a tight leash and corporal punishment is not always frowned on. Domestic violence was made illegal in 2017, but is still relatively common.

Christian aid and advocacy organization World Vision Romania said out of the 16,000 cases of violence reported against children in Romania last year, 14,600 occurred within the family.

„The case in Sângeorz Băi is dreadful, but it (also) brings the reality which many children in Romania experience to public attention. Abuse within the family is harder to detect, because children don’t say anything to protect the abuser, and also out of fear of being stigmatized,” WVR said in a statement.

Local child protection authorities and child rights group said they were investigating the case and would start an inquiry into the youngster’s situation to determine what help and assistance could be offered, Madalina Turza, head of the National Authority for the Rights of People with Disabilities and Children said on Facebook.

A study carried out in 2017 by the National Agency for the Equality of Chances Between Women and Men found that 4 out of 10 people had personal knowledge of domestic violence and 86% wanted harsher punishment for it.

Although films of adults using violence against children are leaked to the media, it is rare when it involves a person holding public office.

Ioan Turc, the county representative of the Liberal Party, said the mayor had been expelled from the party in March 2020 and no longer had the party’s support for his bid for re-election.

Asked about the incident, Prime Minister Ludovic Orban said he was opposed to violent behavior „especially against a minor. He said Mr. Ogagau wasn’t a member of the ruling Liberal Party.

„I am categorically against aggressive behavior, even more so when it’s against a minor. I reject this kind of behavior,” he said Thursday.

In a statement the Liberals said they condemned violence against children, regardless of the aggressor. “Any brutal gesture toward minors must be probed and punished.”