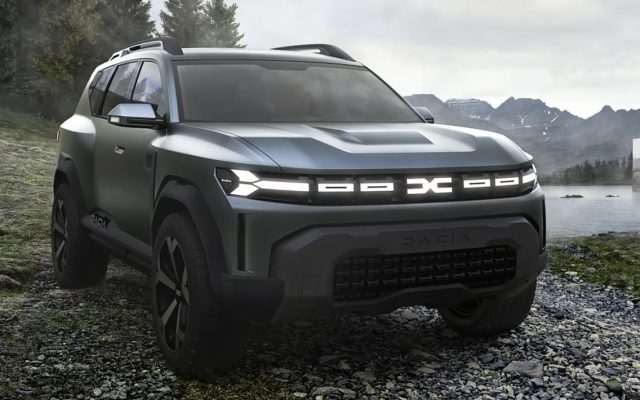 Renault has rolled out the Bigster, a new Dacia SUV which is “as affordable as ever, with a touch of coolness.”

It’s all part of the company’s ‘Renaulution’ corporate strategy that will see it launch 24 new vehicles by the end of 2025.

The Dacia Bigster is a dark green 4.6-metre long SUV that’s supposed to “make the C-segment (medium-sized cars)  accessible, at the cost of a vehicle from the segment below”, meaning it would sit above the Duster in Dacia’s line-up.

Dacia says the Bigster is a “genuine vehicle made with genuine principles”, with “no bells and whistles, no chrome trim or imitation-aluminium” and protective panels made from “raw recycled plastics”. It represents “the very essence” of an SUV with “no more, no less than the essential” and ought to be powered by “both alternative-energy and hybrid engines”

„Dacia Bigster Concept epitomizes the evolution of the brand. Essential, with a touch of coolness and an outdoor spirit. It proves that accessible is not opposed by any meanings to attractiveness. In Dacia we believe so, and this car is the proof,” said
Alejandro Mesonero-Romanos, the Dacia Design director.

Its dark green coat reflects the “adventurous explorer” vibe of the new model.

Dacia has sold 7 million vehicles in 44 countries,  and Sandero and Duster remain respectively the top 1 car and number one SUV sold to private customers in Europe.

It produces good value for money cars and its most popular models are Logan, Sandero and Duster.