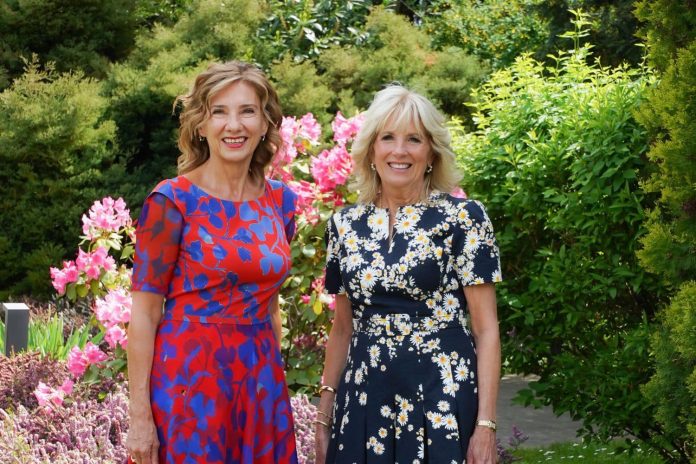 What a lovely meeting it was at a time when the news is so bleak and moments like this are rare. There was hope and humanity on Saturday afternoon in that Romanian classroom where the U.S. First Lady Jill Biden and Romania’s first lady Carmen Iohannis met Ukrainian refugees– mothers and children who told their harrowing stories about how they fled war in their country and found refuge in Romania.

After the immediate news was dispatched, I watched the video of the meeting. Jill Biden came across as warm, compassionate, confident and very likeable. Mrs Iohannis, who keeps out of the public eye most of the time, was lovely too; slightly shy, warm, at home with children, and equally gracious and welcoming.

I think it was the first time I have seen her on a major solo engagement and heard her speak. Her words carried emotion, meaning and conviction.

„We are very grateful you initiated this …. event today. I’m very grateful you took the time and effort and visited us. We have always loved the Americans and we feel safer if we know they back us up, ” Mrs Iohannis said in perfect, slightly-accented English.

„Thank you for coming and giving us hope and the feeling we can rely on you,” she added, echoing what many Romanians feel in a few short phrases.

„The Romanian people are heroes,” Mrs Biden said, telling the Ukrainian refugees. “You are just incredible women!” At times she seemed almost moved to tears by the stories she heard.

The first ladies were gracious in their floral-print dresses; they smiled and appeared  relaxed in each other’s company.

It was a break from an ugly, senseless and destructive war. It was a reminder that even when there is suffering and brutality so close to Romania, there is also hope and humanity.

In Romania, it is more courageous to write something positive about Mrs Iohannis (and her husband President Klaus Iohannis)  than it is to criticize them.

This of course has positive connotations. It is a sign how far Romania’s democracy has come. It shows that Romanian journalists and social media commentators are no longer in terror of their leaders as they were in the days of Nicolae Ceausescu. Just think, any Russian that dares criticize Vladimir Putin and his war on Ukraine risks a fine, imprisonment or worse.

But it also betrays a certain ‘meanness’ of spirit, cowardice, and superficiality. It’s simpler to throw eggs than actually take a deeper look.  This of course isn’t an entirely Romanian phenomenon. There is– and was— plenty of vitriol, small-minded bitchiness and racism directed at Jill Biden, Melania Trump and Michelle Obama. But beyond that, there was decent, fair-minded press coverage of these women.

Mr Iohannis has been in office since 2014 and very little of substance has been written about his wife, Mrs Iohannis, beyond her attire and general social media nastiness. Of course, she may have chosen to lead a mostly private life, but by now there really should have been a decent, fair profile of her.

It was the White House who actually pointed out just before Jill Biden’s visit to Romania that Mrs Iohannis lives an independent life, which makes her in some ways a mold breaker, at least here in Romania.

Sometimes, it takes an outsider to appreciate another country. The White House drew attention to the fact that Mrs Iohannis maintains a separate career from her husband while he serves as head of state. Just like Jill Biden. And Mrs Iohannis has actually kept her job as an English teacher in her hometown of Sibiu. That is a statement of independence.

Of course, Romania doesn’t have an office of the first lady like the United States does and all of the wives of former presidents have had some difficulty reconciling a tricky role. The uneasiness is a result of traumatic memories of Elena Ceausescu who played a leading and very unpopular role in her husband’s regime. But 33 years have passed since then, long enough to decide  it’s time to change tack and maybe even mature.

I would ask anyone whose impression of Jill Biden and Carmen Iohannis’ meeting of Ukrainian refugees is limited to tittle-tattle about bouquets and the color of Mrs. Iohannis outfit, to watch that video.

A dose of humanity and hope can works wonders on anyone.