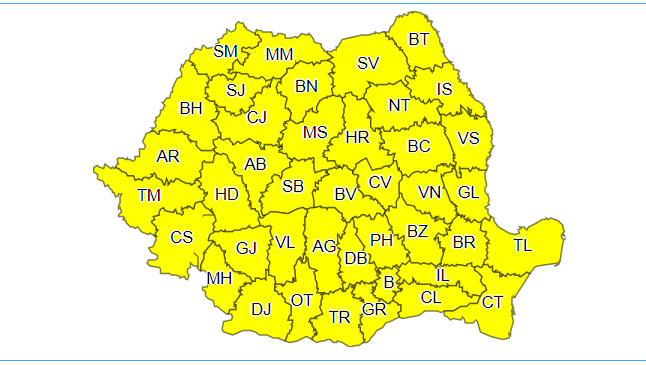 An Amber warning for heavy rain, high winds and ice has been issued for the whole of Romania.

The blanket Amber National Severe Weather Warning for the entire country is valid from 14.00 on Wednesday afternoon until Thursday lunchtime, with the potential for up to 40 liters per square meter of rain in some places.

The weather warning comes as a wave of cold weather enters the country after days of sunny and unseasonably warm temperatures. In Bucharest, daytime temperatures will plummet from 14C on Wednesday to -2C on Thursday.

The cold snap is expected to last into next week with subzero daytime temperatures in some places.

The bad weather will begin with heavy rain in mountainous areas, which will initially melt the snow. The rain will later turn to black ice as the cold spell sets in, the National Met Administration said.

“Gradually, rain will turn to sleet and snow and the wind will gust up to 55 to 65 kilometers an hour, creating blizzards,” a statement said. The northeast Moldova region will be covered in black ice.

Temperatures will drop overnight Thursday into Friday with frost forecast for most of the country except eastern Romania.

However, it will later snow starting in western Romania and then spreading east.

Winds will gust up to 70-80 kilometers an hour, mainly in the southwest, center and southeast making it feel much colder than it is.

It will be even windier in high and mountainous areas, the Met office said.

The cold spell will continue into next week, with subzero temperatures during the night and early morning.