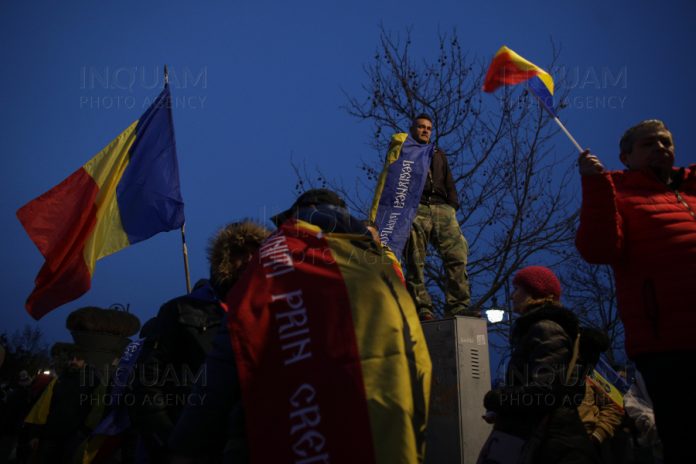 More than 1,000 anti-vaccination protesters have demonstrated in Bucharest and three other cities amid a nationwide spike in cases.

Mainly mask-free demonstrators waved Romanian flags and chanted messages such as “Freedom” and “Down with medical dictatorship!”

Bucharest posted 1,443 new Covid-19 cases on Saturday which was the highest single-day figure since December 15.

The protests came as the prime minister appealed to Romanians to respect restrictions designed to slow the spread of the virus. Cases have shot up in the past week, with about  6,000 new cased reported every day since Tuesday.

The rally in Bucharest was led by Diana Sosoaca, a populist Senator who’s known for her vocal anti-mask rhetoric.

She was until recently a member of the far-right AUR party that has backed anti-vaccination demonstrations that started last year. There were similar protests on Saturday in the northwest city of Cluj, Brasov in central Romania, and the Danube port of Galati.

Police spokesman Georgian Enache said organizers faced fines of up to 2,000 euros for not respecting current restrictions and individual demonstrators could be sanctioned 2,500 lei, about 500 euros, Hotnews reported.

Also Saturday, Prime Minister Florin Citu denied rumors that his government was preparing to announce a new lockdown amid the surge in cases, saying he was encouraged by the vaccine rollout.

“Many people have asked me whether we’ll have another lockdown. My clear answer is NO,” he wrote on Facebook.

“I appeal to Romanians to respect protection measures. This is the only way we’ll get through this period,” he said.

“My goal is to reduce the number of new infections through vaccines. In the coming period we’ll be able to inoculate 80,000 people a day.”

There were anti-virus restriction protests elsewhere in Europe on Saturday. In Germany, police clashed with protesters over measures taken to rein in the spread of the virus.