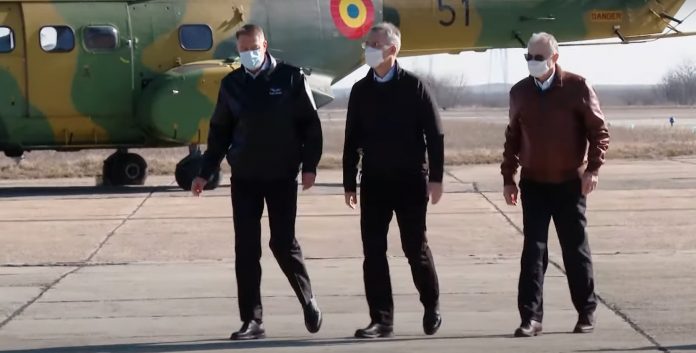 NATO’s top official on Friday warned about the possibility of war in Europe as more U.S. troops arrived at a Romanian military airbase on the Black Sea.

„There is a real risk, a big risk of armed conflict in Europe. There is a risk of a full-fledged invasion and also other kinds of aggressive actions from Russia,” said  NATO Secretary-General Jen Stoltenberg.

“NATO is a defensive alliance,” he said, adding there was still time for Russia to pull back from a conflict and engage in “good faith” talks.

President Klaus Iohannis warned that the current crisis „isn’t just regional limited to Ukraine, the Black Sea or European security. This crisis affects the security of the whole Euro-Atlantic space.”

The NATO commander said the alliance would consider a longer-term presence in south-eastern Europe in the coming months.

The presence of American troops in Romania showed the United States’ commitment to the security of Europe, as more soldiers arrived Friday.

The U.S. is relocating a Stryker squadron of U.S. service members from Vilseck, Germany. A part of the squadron  will be named Task Force (TF) Cougar.

His statements on the eastern flank of the military alliance came as the Kremlin conducted  military maneuvers in the Black Sea, near the southern coastline of Ukraine’s mainland.

This week, a detachment of six Russian landing ships arrived at the Sevastopol port in Crimea. The ships typically are used for unloading troops, vehicles and equipment. Some were used in Russia’s invasion of Georgia in 2008.

Mr Stoltenberg said the military alliance was prepared to ”act rapidly if necessary,” speaking at a news conference.

On Thursday, Mr Stoltenberg  warned that  Europe was facing a “dangerous moment” as Russia prepares to kick off a second day of major military exercises near Kyiv’s border that analysts say could be cover for an attack.

Russia, which denies having plans to attack Ukraine,  has assembled some 130,000 heavily armed troops around Ukraine, from which it annexed Crimea in 2014.

It is participating in the largest Belarus-based training exercise it has ever held, within striking distance of Ukrainian territory.

U.S. forces have used the Mihail Kogalniceanu air base on the Black Sea since 1999. Romania, a NATO member since 2004, also hosts a ballistic missile defense system in southwest Romania.