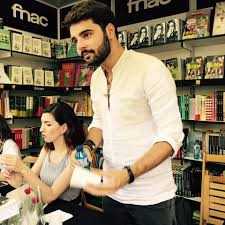 In Spain, he’s a name in the literary world, with his poems seen by thousands who ride the Madrid subway. But he’s yet to have one of his books published in his home country, Romania.

Mihai Gane or Miguel Gane as he’s known, moved to Spain with his family when he was nine and grew up there, one of hundreds of thousands of Romanians who moved to Spain in search of more opportunities and a better life.

Before moving to Spain, the 27-year-old spent his early life in Leresti, a village in central Romania in the Carpathian foothills.

In recent years, he’s had three books of poetry published in his adopted country, but most Romanians have never heard of him, which is the source of some frustration, he told Romanian publication Adevarul.

His three books of poetry written in Spanish are:„ Con tal de verte volar ,“ (As long as you see it fly), “Ahora que ya bailas “ (Now that you’re dancing) and his last volume La piel en los labios. “ (My skin on your lips)  which are all published by Penguin Random House.

He’s sold 100,000 books, which is a lot for poetry books which are less popular than novels or non-fiction.

He told Adevarul: “I was very happy that it was the best-selling poetry book in Spain for a few months”

Even if the Spanish know him as Miguel Gane, his family still call him Mihai.

He first became interested and started writing poetry as a teen when a private tutor “who became a sort of grandfather” piqued his interest.

After school, he got  a degree in law and public administration but hasn’t practiced law and devotes his time to writing.

His  verses have been displayed in the Madrid subway so that „commuters can think of poetry, a simpler, nicer  life.”

“What an amazing promotion to have tens of thousands of people on the subway to see your work,” he told Adevarul.

In 2017, he was shortlisted for the National Poetry Prize. His poems gave been published in Central and South America and he has 360,000 followers on Instagram.

His first book was printed in 17 editions although the Romanian Cultural Institute has passed him by and publishing houses haven’t shown any real interest.

„Alas….. I haven’t received any offers. It’s a paradox. I’d be delighted for my books to be translated into Romanian but I’m not sure how well my style would go down at home.”

“Romanians are used to traditional, classic poetry, but I’d be curious to see how people in Romania would react to my poetry!”

Mihai Gane says it’s harder to be a poet than a novelist, as novels sell better than poetry, but he said social media has helped him make a name for himself.

Council of Europe notes improvement in corruption fight in Romania