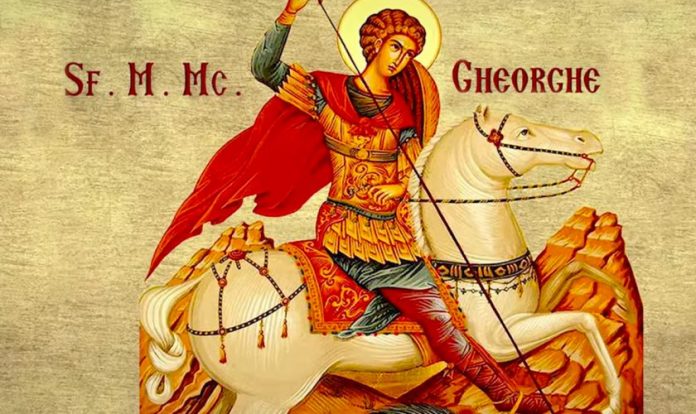 More than one million Romanians on Friday celebrated St. George’s day, the Christian martyr whose courage made him the patron saint of England, Ethiopia and Venice.

George is believed to have been an officer in the Roman Army, who was executed by the Emperor Diocletian for refusing to renounce his Christianity.

. It is believed he was born in Cappadocia, in what is now Turkey, to Greek parents. There is a shrine, said to contain his body, in Lod, Israel.

In England he was made famous by legend when he killed a dragon and he became England’s patron saint in the 14th century.

As well as England, he is the patron saint in Venice, Genoa, Portugal, Ethiopia and Catalonia. Many of these places have their own celebrations and ceremonies in his honor.

Orthodox Christians also celebrate him on Friday. There are more than one million Romanians called George or variations of the name, such as Georgiana or Gheorghe. They celebrate their name day like a second birthday.

What makes George stand out from other saints is his slaying of a dragon.

The earliest story about St George rescuing a princess from a dragon dates to the 11th century. It may have started simply as a metaphor for military saints slaying dragons, symbolizng the triumph of good over evil.

The 13th century publication of Golden Legend, a popular collections of saints’ lives, cemented the story in the public consciousness.

Nobody really knows the origin but there are plenty of colorful stories that were circulated by early Christians.

One legend claims he was slowly tortured to death over a period of seven years, having been torn on a rack, battered about the head with hammers until his brains oozed out, forced to drink poison, torn on a wheel and boiled in lead.

George was canonized by Pope Gelasius in 494, although he was keen to distance the church from some of the legends about his death which he considered something of an embarrassment.

He declared that George was among those saints „whose names are justly reverenced among men, but whose actions are known only to God.

Richard the Lionheart is ultimately the reason why St George ‘became’ English, having brought his insignia back to England after fighting the Crusades.

George was officially declared Patron Saint of England in 1350 by Edward I’s grandson King Edward III, when he formed the Order of the Garter of St George. George’s following was further advanced by King Henry V, at the battle of Agincourt in northern France.