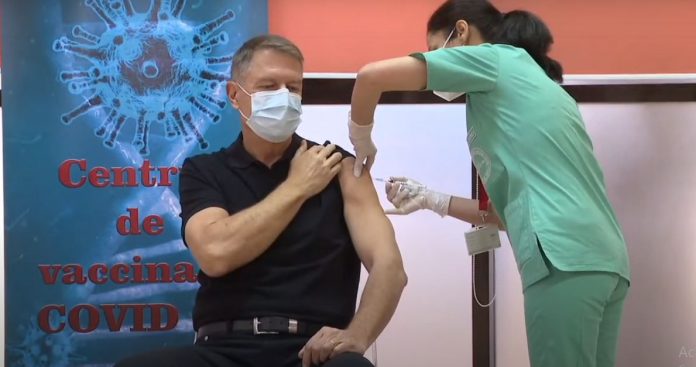 President Klaus Iohannis had the Covid jab on Friday and appealed to Romanians to get inoculated against the virus as the vaccination campaign moves into the second phase.

The president, who was inoculated at the Carol Davila Emergency Military Hospital, said it was a painless procedure.

“I just got vaccinated. It is a simple procedure, it doesn’t hurt, and I want to emphasize that this vaccine is safe, effective, and I recommend vaccination to everyone,” he said after the shot.

„Vaccination and compliance with the restriction measures will help us stop the pandemic,” he added.

More than 167,000 people have been inoculated since December 27 when the rollout started, authorities said Thursday. Healthcare professionals were the first to get the jab which is followed by a booster dose three to four weeks later.

There are mixed views about the vaccine in Romania where more than 685,000  have caught the virus and about 17,000 Covid-19-related deaths have been recorded.

A survey carried out by Reveal Marketing Research showed 36% of respondents were eager to get the vaccine, while 38% said they did not want to get vaccinated. One-fourth said intended to get vaccinated later on.

The second phase of the vaccination campaign which started Friday targets the over-65s, and people with chronic illnesses, as well as essential workers which includes lawmakers and government officials.

Prime Mnister Florin Citu will get the vaccination on Saturday, his office said.

The list of the chronic illnesses covered by the second phase of the campaign includes diabetes, obesity,cardiovascular diseases, kidney diseases, cancer and lung disease.

The third stage will cover the rest of the population.

Some 54% of those who said they didn’t want to be vaccinated believe the vaccine has not been sufficiently tested, while 48% of respondents said they were afraid of the effects.

Some 1,011 people over 18 were interviewed online in urban and rural areas between Januray 6 and January. There was a 3% margin of error.