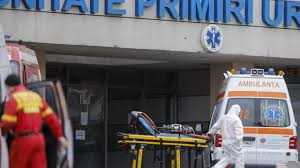 Romania has reported 6,333 new cases of coronavirus on Saturday as testing slowed down ahead of the weekend.

The Strategic Communication Group said there were 148 Covid-19 related deaths in the past 24 hours, while 1,288 seriously ill patients were being treated in ICU. Overall, there were less than 12,000 hospital beds occupied by SARS-CoV-2 patients.

From Friday to Saturday, about 26,400 tests were carried out giving a positivity rate of about 23%, a slightly higher rate than Friday but still lower than previous weeks.

Bucharest registered 1,156 new cases, more than anywhere else but much lower than previous days. Authorities said that the infection rate had fallen to below 7 cases per 1,000.

The Black Sea Constanta region which has seen a spike in the past month reported 437 new cases and Ilfov, a region next to Bucharest recorded 344 infections.

Fourteen prisoners at the Targu Jiu Jail in central Romania have tested positive  for the virus, authorities said Saturday. They will be treated a prison hospital near the capital.

There was an outbreak at the prison earlier this week with 14 detainees confirmed to have caught Covid-19.