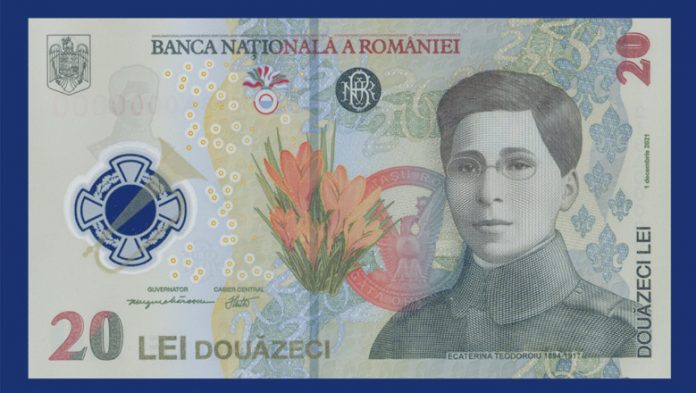 Dubbed ‘Joan of Arc’ of Romania by a prominent French general, she was the first woman Army officer in Romania.

The new 20 lei note bearing her image goes into circulation on December 1, which is Romania’s national day.

„It answers a …. legitimate public interest to promote and consolidate gender equality and the major role female characters have played in Romania’s history and society,” he added.

The Romanian leu (which means lion) was first minted in 1867. It has featured several unnamed female peasants but never a real historical figure.

Born in 1894, she initially worked as a nurse at the beginning of World War I and then joined reserve soldiers to fight the German Army near her home.

She traveled to the front line to see her brother who was killed by an artillery shell shortly afterwards.

Wishing to avenge her brother’s death, she joined the 18th Infantry Regiment as a volunteer.

She demonstrated her military skills after the regiment was surrounded by German troops. She announced in German that her regiment would surrender. She then shot and killed several Germans allowing most of the company to escape.

She was later captured during another battle,  but managed to escape by killing the German soldier guarding her with a concealed gun.

The Germans continued their advance and she was injured in skirmishes. She recovered and was decorated for her courage. She then returned to another regiment as a voluntary nurse.

For her bravery, she was given the command a 25-man platoon, becoming the first ever woman Romanian Army officer.

In September 1917, while leading her platoon in a counterattack, she was mortally wounded by machine gun fire.

Her dying words were: „Forward, men, don’t give up, I’m still with you!”

The central bank will put on a exhibition in her honor starting December 6 Her personal items including a helmet and blood-stained munitions bag will be exhibited.

The idea of depicting women on the currency arose in 2018, when fashion journalist Janina Nectara launched a campaign, suggesting a list of 100 female figures, including scientists, doctors, artists and professors.

French General Henri Berthelot  named her the „Joan of Arc of Romania” for her outstanding bravery, patriotism and self-sacrifice.