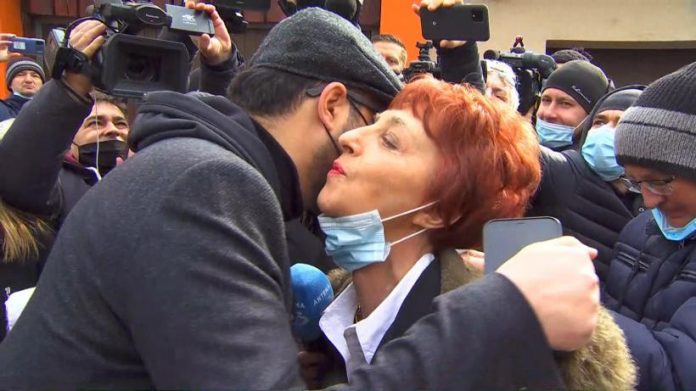 Dr Flavia Grosan is the latest Covid cause celebre in Romania.

The pulmonologist who claims Covid-19 treatment is harming patients has attracted thousands of supporters and made headlines for the past week.

Dr. Grosan who is from the western city of Oradea gained national notoriety after a series of controversial statements were picked up by the media about the kind of medical treatment virus patients are receiving.

The doctor who has a private clinic claimed: “I cured almost a thousand Covid patients with varying forms of severity,” of the illness without any hospital stays. She didn’t however provide any evidence.

She said she treated the virus as „atypical pneumonia.”

More controversially she claimed that current treatment of Covid-19 patients was harmful and could result in deaths. She has suggested hospitals are making mistakes.

Her headline-generating statements have attracted thousands of fans on social media and support from ordinary people.

She’s been called „an angel, and „a goddess” on social media, while someone even suggested she should be health minister.

But she’s also been rude about tennis star Simona Halep who caught the virus last year, and mocked her own father for getting a vaccine.

If her story generates ‘clicks,’ her simplistic statements have resonated with people who distrust authority or consider themselves “anti-system.”

This week, Dr. Grosan was called to the Medics College in Oradea, located about 600 kilometers from Bucharest to explain her remarks. Dozens gathered outside for an event that generated widespread media coverage.

Antena 3 talkshow host Mihai Gadea who hosts his program in the capital popped up, and publicly embraced her in front of the cameras.

„Antena 3 presented Flavia Groșan as a heroine, insisting that she was applauded and received flowers after her hearing,” Newsweek Romania reported.

The College hasn’t taken any action against her and said it merely wanted a ‘friendly chat.’

Romanian-born doctor Ion Alexie who is an infectious disease specialist in Las Vegas, in the U.S., congratulated her. However, he questioned how many patients she’d actually cured.

“She has been fortunate enough to treat patients at a very early (stage). Whether she actually cured 1,000 patients or maybe 500 or maybe 700 is to be welcomed and not judged, especially not in an accusatory manner,” he told Antena 3.

“It’s true we don’t have perfect protocols,” he said, appealing for more flexibility in the way doctors treat patients.

He pointed out that the disease “is very new and it’s permanently changing and everywhere (medics) are looking for the best treatment.”

Monica Pop, the manager of the Eye Hospital in Bucharest, also praised her saying she’d saved patients from developing more serious forms of the disease.

Other colleagues however have questioned not only the content of her statements, but also why she went public.

One of her claims that has generated debate is that if medical oxygen is administered in large quantities, causes cerebral edemas. She also controversially claimed that patients with 80% oxygen levels can be treated at home.

A normal level of oxygen is usually 95% or higher. Some people with chronic lung disease  can have normal levels around 90%. Doctors normally advise hospitalization for anyone with less than 90%.

She says she treats patients with clarithromycin, an antibiotic used to treat various bacterial infections including pneumonia.

Dr Alexandru Rafila,  a top doctor, said he would opt for “the protocol which is established by the Commission of Infectious Diseases…. which generally respects most recommendations of EU members and the U.S.”

Dr Rafila was head of the Matei Bals National Institute for Infectious Diseases before he was elected to Parliament last year.

The head of the Emergency Services, Raed Arafat, urged people „to be careful where they get their information from,” because „lives can be in danger.”

Questions also emerged about her motives after she posted disparaging comments on social media last year about Simona Halep and Olympic gold medalist Gabriela Szabo who both contracted Covid-19.

They both urged people to take the disease seriously, wear masks and respect social distancing.

Dr Grosan expressed an ambivalent attitude to face masks which are mandatory in public places.

„Who are you Halep to officially tell me that you have Covid? After you drove me crazy about wearing a mask, you missed a shot and you caught it (the virus). Give me break,” she wrote on Facebook.

She also appeared to poke fun at her own 83-year-old father for getting a Covid jab, and downplayed the pandemic in post in January which was a period when cases subsided.