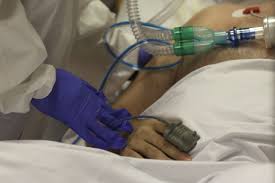 The Romanian capital and another area went into ‘red alert’ due to a spike in coronavirus cases and doctors in two regions warned about shortage of hospital beds to treat Covid-19 patients.

Romanian authorities reported 3,400 new cases of coronavirus, a drop from previous days, with a lower percentage of people testing positive for the virus.

The Strategic Communication Group said the infection rate continued to rise in Bucharest to 3.23 cases per 1,000 people, above the critical ‘3’ figure that triggers new restrictions.

Starting midnight Tuesday, masks are mandatory in all inside and outdoor public places in the capital. Restaurants, bars, cinemas, theaters and gambling shops have been closed for a fortnight. Restaurants without outdoor seating appeared to be allowed to keep operating.

Schools in the capital also shut with students returning to online learning as they did in the first two months of the pandemic.

Some 545 new cases were reported in Bucharest on Tuesday, lower than the past two days.

Covid-19 cases also surpassed 3 per 1,000 inhabitants in the central Alba region on Tuesday for it to become the second ‘red alert’ area, meaning new restrictions.

Doctors at a hospital in the southern city of Ploiesti, in a region which has seen consistently high numbers of Covid-19 infections, said they were at a point where they had to decide which patients had access to intensive care therapy.

Medic Violeta Tanase said some patients were waiting three days to be transferred to the intensive care unit due a lack of beds. “We didn’t have beds for them,” she told Digi24.

Dr Virgil Musta, head of the Victor Babes Infectious Diseases Hospital in the southwestern city of Timisoara said Romania needed to have a strict lockdown of “two to three weeks” to limit the spread of the virus.

“Now we have to choose who we can save and who we can’t. there are people with medium and severe forms (of the virus) and we are sending them home and hoping they don’t deteriorate,”  news.ro reported.

There were 65 Covid-19 related deaths in the last day and a record 768 patients were being treated in intensive care units.

Despite widespread concern about the spread of the virus, there  were 29,845 tests carried out in the last 24 hours, giving a ‘positivity rate’ of 11.39%, the lowest since October 9.

Two Covid-19 patients in their 40s died, six in their 50s, a dozen in their 60s, and 45 who were older than 70. Four patients who died did not have underlying health conditions such as cancer, diabetes or heart disease.