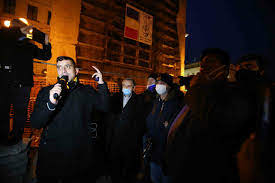 A Romanian nationalist party on Monday called for ‘minor topics’ such as the Holocaust and sex education to be expunged from the school curricula.

It said that teaching special classes to Romanian pupils about the hundreds of thousands of Jews and Roma who died under Romania’s Nazi-allied government was “a systematic action to undermine the quality of Romanian education.”

But the Alliance for the Union of Romanians which voted against the law called the development „ideological experiments on children.”

“The party observes that minor topics which could be included in other classes such as sex education and the history of Holocaust ere are becoming subjects in themselves,” it said.

The party, known by its acronym AUR is a far-right group that came from nowhere to take fourth place in 2020 parliamentary elections is known for its ultraconservative, anti-vaxx and nationalist views.

“As such, it needs to be made illegal,” he told Radio France Internationale. “There are a number of elements which make this possible and call for this mechanism to be set in motion.”

“The state needs to have a strategy to confront this demon of the past,” he said.

There is widespread ignorance about the Holocaust and Romania’s role in the atrocities.

The Elie Wiesel Institute for the Study of the Holocaust published a survey on December 23 in which 59% of respondents called Hitler allu Marshal Ion Antonescu “agreat patriot’ and 46% admired him for his anti-communist credentials, the survey found.

However, 41% were opposed to him being rehabilitated, the study found.

Some 135,000 Jews living under Hungarian control in northern Transylvania were also killed in the Holocaust. Most surviving Jews emigrated to Israel under communism. There are about 3,000 Jews in Romania today.

In the 2018-2019 school year when the history of the Holocaust first became an option in schools, about 1,850 students took classes.

Mr Muraru’s role was created a year ago to raise public awareness about the issue as well as the history of communism.

The AUR said that if “the Education Ministry isn’t going to form the young generations on basic themes of Romanian culture and spirituality then we might as well call it the Minister of Re-education for the Global Market…. It’s a bad joke.”