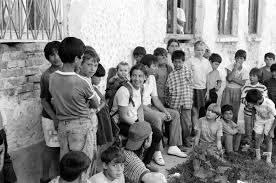 Children raised in deprived orphanages in communist Romania have brains that are one tenth smaller than English adoptees’, research shows.

Scientists took brain scans of nearly 70 people raised in Romanian institutions in the 1980s and later adopted by families in Britain which showed that early neglect left its mark, British newspapers reported.

The volunteers had all been beaten, starved and deprived of social interaction as babies and toddlers.

On average, their brains were 8.6 per cent smaller than English orphans who had not suffered the same levels of neglect..

The Romanians also had a higher rate of low IQ and greater symptoms of attention deficit hyperactivity disorder (ADHD).

And these physical changes go on to affect cognitive abilities and mental health as children grow, the academics speculate.

Former Communist leader Nicolae Ceausescu banned abortion and contraception in an effort to increase the population.

As a result, hundreds of thousands of Romanian children were left in state care often in squalor, beaten and lacking heat and food because their parents were unable to look after them.

Many of them developed psychological disorders and were infected by diseases such as hepatitis B and HIV from contaminated needles.

As part of their latest study, King’s College scientists looked at MRI brain scans of 67 Romanians aged between 23 and 28 who’d been in the orphanages in their first few weeks of life.

After communism collapsed in 1989, the plight of thousands of emaciated and diseased babies was revealed and shocked the world. Infants were found slowly dying in filth infested cradles in the orphanages. Some children were tied to their beds. Girls and boys’ heads were often shaved and children would  sit naked.

The participants had spent between three months and three years in the homes. Analysis showed participants’ brains were smaller the longer they had lived in them.

In comparison to British adoptees, the Romanians had visibly smaller right inferior frontal regions in the brain.

These areas are important in cognitive skills, such as emotional expression, problem solving, memory, language, judgment, and sexual behaviors.

The changes were also associated with lower levels of ADHD symptoms.

Lead study author Dr Nuria Mackes, a researcher in child and adolescent psychiatry at KCL, said: ‘Previous research… has suggested that the emergence and persistence of low IQ and a high level of ADHD symptoms involves structural changes in the brain but, until now, we have not been able to provide direct evidence of this.

Co-author Mitul Mehta, a professor in neuroimaging, added: ‘We found structural differences between the two groups in three regions of the brain.

‘These regions are linked to functions such as organization, motivation, integration of information and memory.

Prof Edmund Sonuga-Barke, a co-author of the study from King’s College London, who added that the results showed neuroplasticity had limits.

“The idea that everything is recoverable, no matter what your experience … isn’t necessarily true – even with the best care you can still see those signs of that earlier adversity,” he said.