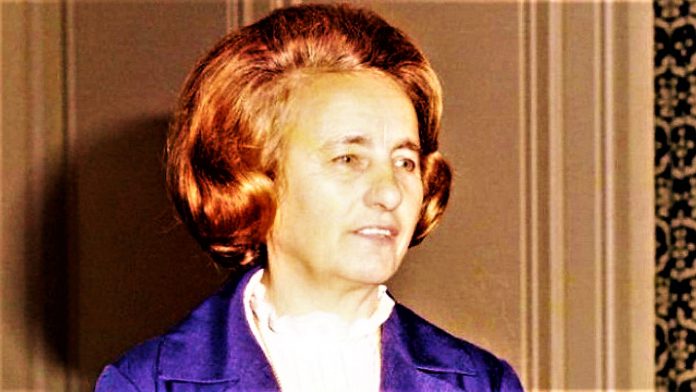 Romanian researchers have called on academic publishers to remove Elena Ceaușescu’s name from almost two dozen scientific papers and books fraudulently published as her work, three decades after she was executed, the Guardian reported.

The wife of Communist dictator Nicolae Ceaușescu was celebrated by state propaganda as a world-famous chemistry researcher, although in reality she had no credible qualifications.

Her name lives on in academic journals and British institutions have yet to retract honors given to her, the report said.

Researchers told the Guardian that some of her work is still being cited and accessed, despite the fact she couldn’t even recognize basic formulas taught to first-year chemistry students.

They are calling for her honorary titles, awards and PhD to be revoked. They also want institutions including the UK’s Royal Society of Chemistry and the Polytechnic of Central London (now the University of Westminster) which honored her to strip her of recognition and acknowledge that her scientific career was a sham.

Her PhD was never retracted in Romania, even though it was widely known she did not write it. The story published Wednesday comes a week after the minister of innovation and digitalization Florin Roman resigned after significant irregularities appeared on his resume and evidence he plagiarized from an academic paper.

He is the latest senior official in Romania to be undone by allegations of plagiarism.

Andrei Dumbravă, a doctor and senior lecturer at the Alexandru Ioan Cuza University in Iași and Chris Isloi, a neuroscience and psychology researcher based in London are two academics leading the call to have the scientific record corrected.

Isloi says it is proving difficult “since no academic publishers ever wrote their publishing guidelines anticipating an author might be a communist dictator’s illiterate wife”.

The Ceaușescus were executed on Christmas Day 1989 after a bloody uprising,

Her claim to scientific status was driven by her own desire for prestige, the Guardian said. Romania was seen as a maverick state in the former Eastern Bloc despite repression at home.

Isloi believes this special status and Ceaușescus’ craving for international recognition and legitimacy was the reason Elena’s scientific credentials were raised to such heights.

Elena Ceaușescu was born to a family of farmers in 1916. She attended night school at the Polytechnic Institute in Bucharest and after her graduation went to work at the National Institute for Research and Development in Chemistry and Petrochemistry (ICECHIM), in the department working on elastomers – a type of polymer.

She was an unskilled worker in the institute, under the supervision of the person who had most worked on her PhD, according to her biographer

Ceaușescu’s reputation was also promoted by Romanian officials who pushed for recognition from respected institutions in the west. Dumbravă says she had a “childish desire” to be showered with gifts from around the world as a sign of her prestige.

Dennis Deletant, a historian and emeritus professor of Romanian studies at University College London, told the Guardian he was approached by the principal of London University in 1978, who told him Romanian diplomats had been trying to get Ceaușescu an honorary title ahead of her state visit in June of that year. Dr. Deletant was asked whether this was a wise decision.

He says: “The Romanian embassy in London made strenuous efforts to persuade certain British academic institutions to recognize Elena’s ‘scientific achievements’– she was trumpeted in the Romanian press as ‘a scientist of world renown’, even though her doctorate was the work, I was reliably informed by Romanian sources, of a professor at the University of Iași.”

Both the University of London and the Royal Society rejected the Romanian requests.

The Romanian embassy then turned to the Royal Society of Chemistry, which made Elena an honorary fellow, and the Polytechnic of Central London, which gave her the title of honorary professor.

Neither organization responded to a request for comment on the call to revoke Ceaușescu’s credentials.