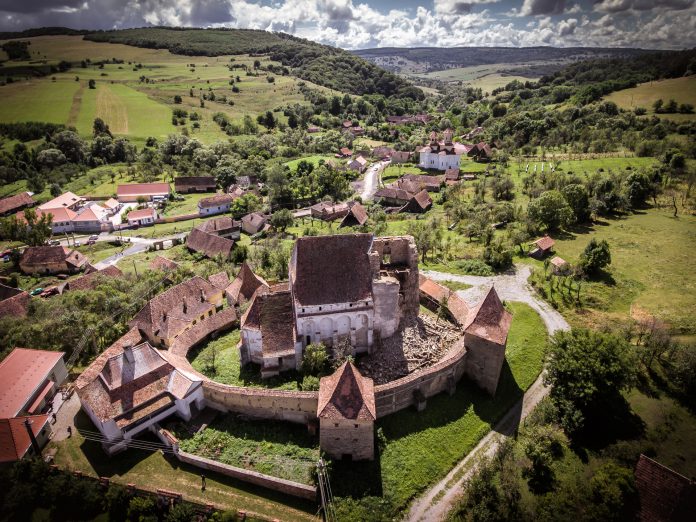 Thinking of a trip to Transylvania?

Whether you’re looking for a romantic getaway, a family break or simply a weekend away from the city in these pandemic times, Crit has everything you’d hope for, and more.

It lies just east of the medieval citadel of Sighisoara where Vlad the Impaler was born and is one gorgeous village.

The hamlet of about 700 souls boasts a medieval church and visitors rave about Casa Kraus, a boutique hotel that blends traditional Saxon style with modern comforts in countryside that could be right out of a Brothers Grimm fairy tale_ without the scary bits.

Transylvania is probably best known as the magical and mystical place that was turned into the Dracula myth by Bram Stoker in his 1897 novel loosely based on Vlad the Impaler. That alone is another reason to visit the area.

The boutique hotel is the perfect place for a relaxing stay, or a tasteful and authentic base outfitted in traditional Transylvanian style from which to explore the countryside.

“The fortified church with its medieval walls and the old parish house which has been lovingly restored with authentic Saxon furniture rescued from cellars and barns across the Oat Country make Casa Kraus a very special place,” Marana Nicolae, Communication Manager of the M&V Schmidt Foundation said. ”It’s like stepping into a history book”

Back in the 19th century, Casa Kraus was the village’s parochial house where the local pastor lived. It’s a few yards uphill from the fortified church. When there are services, the church bells ring across the valley.

Named after one of the former parish priests, this solid Saxon house has the air of a wealthy rural manor and offers the creature comforts you’d expect of a four-star establishment.

The valley itself lies in a swath of land called the Oat Country or Hafenland in German, with a superb view from the hotel which is medicine for the weariest soul.

From spring onwards, guests can eat their meals on the outdoor terrace while soaking in the bucolic surroundings.

“Guests enjoy the comfort of a boutique hotel with impeccable service and also experience the old Saxon way of life,” Ms Nicolae added. “ There’s a traditional Saxon welcome for guests and the menu offers dishes such as homemade noodle soup or “lichiu” a traditional Saxon sweet cheese pie which is served at weddings” and other special occasions.

Crit, or Kreuzdorf  as it is known in German is famous for its “lichiu” (Hanklich in Saxon German), a dessert which is sweetened with locally sourced fruits such as rhubarb, plums or blackcurrants.

After feasting on local delicacies, “guests can go for walks or ride bikes in the hills surrounding Crit,” she said. “It’s like going back in time or reliving the holidays you had at your grandparents.”

The village was founded in 1322 in the wake of the church which was built 50 years earlier.

Casa Kraus offers guests a welcome respite from pandemic concerns and can be reached by road from the capital Bucharest in five to six hours depending on traffic.

It lies in the heart of the area that enchanted Prince Charles. The British prince owns a house in the Viscri, a village just down the road which he used to visit every year until the pandemic.

The Oat Country was home to German-speaking Saxons, who emigrated in their thousands during the communist era. Some have returned, however, and are investing in their heritage, restoring it to its former glory.

Casa Kraus was repurposed by Michael Schmidt and his wife Veronica. Mr. Schmidt left the village when he was a teenager, went into business and is now the largest BMW dealer in Central and Eastern Europe and the only Rolls Royce dealer in the region.

The couple established the M&V Schmidt Foundation which restored the church’s Baroque organ and old parochial house, turning it into the hotel.

They also created the Hafenland annual festival which celebrates the traditions in the local Saxon villages, from jam making to hay tossing.

Last year the festival was held online due to pandemic restrictions, but this year it returns to its usual place around the church and in Crit and the surrounding villages.

The Oat Country is a a stretch of land which lies between Sighisoara and Brasov. It’s best known for its fortified churches, medieval towns, wide, rolling hills and gentle skies.

In recent years it has been designated one of Europe’s most attractive travel destinations, without the crowds.

The Financial Times called it the “new Tuscany,” only an unspoiled and less manicured version of the Italian province.

The Saxon fortified churches are “messengers of the long gone times, honest stone testimonies of a past that should not be forgotten,” National Geographic said last year in an aerial photo essay which you can find on its Facebook page.

If you’re staying Crit, don’t miss the other Saxon villages in the Oat Country which include Bunesti, Viscri, Roades and Mesendorf.

“It is a place full of authentic, beautiful and positive vibes,” Ms Nicolae said. “What more could you want for a perfect vacation ?!”

How to get there: Drive on the E60 from Brasov and turn left about 20 kilometers before Sighisoara.

Take the train from Bucharest’s Gara de Nord to Sighisoara (about 5 hours 30 minutes) and catch a local bus to Criț.

Where to Stay: Casa Kraus. For style and comfort and authentic Saxon style, stay in this four-star hotel. A double room is 80 euros a night.