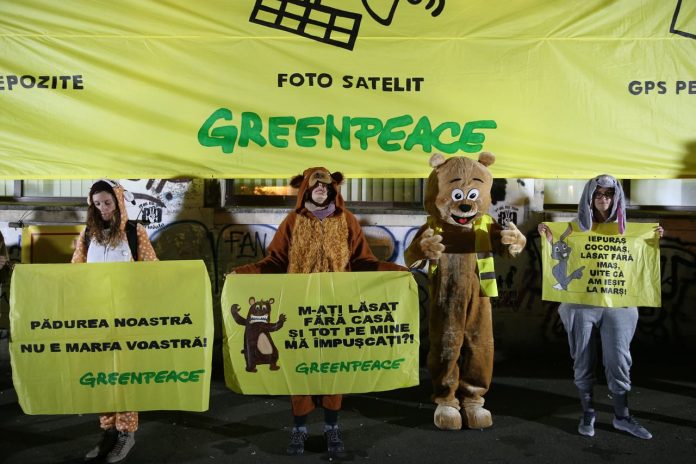 Thousands of people in Romania have staged marches in cities around the country to demonstrate against illegal logging and demand better protection for the country’s virgin forests and to protest the slayings of two forest rangers who were killed in just over a month.

The deaths raised fears for the safety of those whose job it is to protect the forests of Romania, which is home to more than half of Europe’s last remaining old-growth and primeval forests.

Forest managing company Romsilva, which manages half the country’s forests, says violent incidents have multiplied „against a background of strengthening measures to prevent and combat illegal cuts”. It said 185 rangers had been attacked since 2014. A total of six rangers have lost their lives in recent years.

On Sunday evening, thousands assembled in University Square, some on bicycles, or accompanied by pet dogs and young children, or wearing items of green clothing to express support for the environment. They later marched past the environment ministry. Costel Alexe who’s been nominated as environment minister said he was alarmed by illegal logging and supported efforts to protect the forests as he took part in Sunday’s march.

Maria Aylin Ghela, an 18-year-old Bucharest high school student who is a Greenpeace volunteer, was dressed as a fox. She said she wanted want logging to be electronically monitored to reduce illegal activity, starting in the  forests when the wood is cut, then when the logs are transported and also when it is in storage.

Hundreds gathered in the Transylvanian city of Cluj and held banners saying: “We are all for the rangers” and “We don’t have a Planet B” and “Save the forests!” They lit candles and held a moment’s silence for rangers who have been killed

They yelled: “We don’t want illegal logging; our planet is dying!” Hundreds protested in Brasov and the northern city of Bistrita.

Last week, a couple of hundred Romanian rangers protested the deaths of their colleagues who were killed within a month while trying to stop illegal logging.Some 40 environmental groups urged the government „to take action to dismantle organized criminal syndicates in the forestry sector and to strengthen the legislation against illegal logging”.