Romania’s bears usually make the headlines when they attack humans or livestock, go foraging for food in people’s homes, or are involved in a traffic accident.

But a trio of three brown bears strolling through the forest has been viewed almost 30,000 times since it was posted on Thursday.

Three brown bears were spotted in a forest in the Calimani National Park in Romania at the end of November.

Romanian forest management company Romsilva on Thursday shared a video of the bears calmly walking in line through the forest in northern Romania.

The images were captured by the wildlife monitoring cameras installed in the area.

The Calimani National Park is one of Romania’s 22 national parks managed by Romsilva, It spreads over Suceava, Mures, Bistrita-Nasaud and Harghita and covers an area of 24,556 hectares.

Romania has about 5,000 to 6,000 bears, the largest population in Europe outside Russia. Their numbers are declining alarmingly due to over hunting. 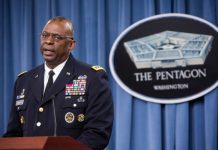