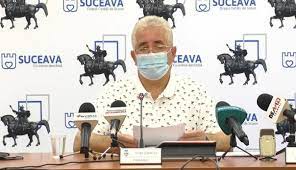 The city of Suceava in northern Romania was the epicenter of the pandemic when it first started.

For the past two weeks, there have been no new cases on several days and a maximum of four on others.

The city’s mayor said this week he believes that a religious procession earlier this year in the city led to a drop in Covid-19 cases.

The Bucharest government placed the city under a state of emergency after the virus ravaged the city’s main hospital, infecting patients and medics.

In May 2020, Suceava had about one-fifth of Covid-19 cases and more than a third of the deaths nationwide, even though its population was only 3% of Romania’s entire population.

In March this year amid a rise in cases, Romanian Orthodox cleric organized a religious procession through the city with the relics of St. John the New,  the14th-century patron saint of the city.

Hundreds of Orthodox believers lined the streets. Priests stopped the at St. John the New Hospital, the main medical facility and a retirement home. They prayed for an end to the pandemic.

Suceava mayor Ion Lungu on Wednesday said he believed that the religious festival had resulted in fewer infections.

„God protected us here in Suceava. I felt this from the Spring when I saw the procession of the saint’s relics on the streets “ he was quoted as saying by the Agerpres news agency.

Romania saw a new wave of infections_ up to 10,000 a day_ in March which tapered off in April. May and June have seen a lull. Authorities expect cases to climb in the fall.

He said that local residents had come to him after the event and told him: “I was in the hospital, Mr. Mayor, and the saint’s relics were in the hospital courtyard and I revived. I got better. Everything contributed in one way or another.”

The mayor said he was grateful that Suceava was now in a state of “normality”.“I am a person of faith.  I believe in God and God works though people” he said.

The mayor however appealed for people to be vigilant and get vaccinated “to avoid a possible new wave of the pandemic”.

„I am by nature cautious. You can see how easily there can be new outbreaks. “

“Even if we don’t have cases, we aren’t out of the woods” despite the pandemic acting  “gently” with us this summer, he said.

Mr Lungu, who’s been mayor since 2004, said he favored maintaining a state of alert throughout Romania.

St John the New, a martyr, is one of the most venerated saints  in the northeast Moldova region.

His relics are kept in a monastery bearing his name in the city. His feast days are celebrated on June 2 and June 24.

Suceava, the epicenter of Romania’s coronavirus outbreak. 170 medics and patients infected with the deadly disease in the small northern region