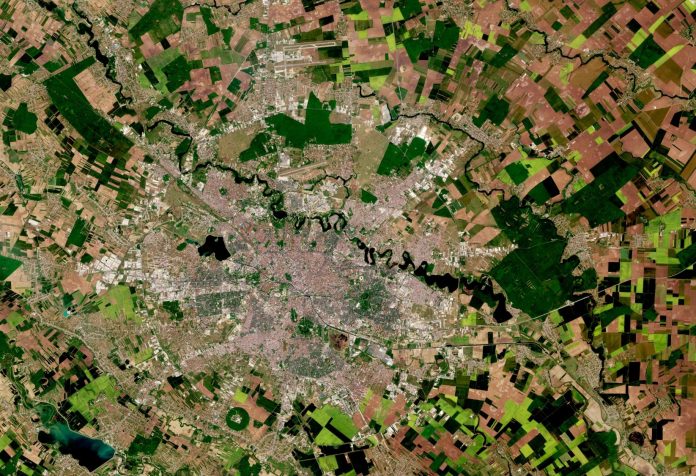 The Romanian capital can be noisy, crowded and maddening at the best of times.

But far away, the city of 2 million looks pretty spectacular _ peaceful even.

The European Space Agency (ESA)  has shared an image of Bucharest taken from space.

It was captured by the Sentinel 2 satellites of the Copernicus EU Earth observation project on April 9.

The most striking thing is how the center of the city looks like it’s been bashed with a stone, while the outer parts look altogether fresher and cleaner.

That’s because the city center is full of old and sometimes decrepit buildings, while many newer buildings were built in the suburbs in the last 20 years.

The city covers 225 square kilometers and lies on a plain in southeast Romania.  In the distant past, it was covered by a forest which gave way to a “fertile flatland” after it was cleared, viewers are told.

The distance imaging highlights the giant House of the People, built by late Communist dictator Nicolae Ceausescu, and now known as the Palace of the Parliament.

It also points out Vacaresti Nature Park, a sprawling park in south Bucharest containing the wetlands surrounding Lake Vacaresti and 100 species of birds.

The Dambovita, a tiny tributary of the River Danube snakes through the city center,

The video points out the agricultural land around the city.

The only things missing are people and cars, giving the viewer an unreal yet compelling look at the city.